By Cosmin Stan, For CNN 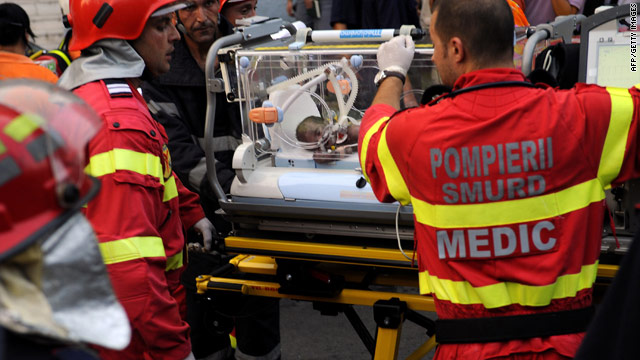 Rescuers tend to a newborn injured by a fire at the Giulesti Maternity Hospital in Bucharest, Romania, on Monday.
STORY HIGHLIGHTS

Bucharest, Romania (CNN) -- Medical staff at a Romanian hospital where five newborns died were in another room, apparently having a celebration, when the fatal fire broke out, the chief prosecutor in charge of the investigation said Friday.

Investigators have received statements that someone came out of the room with a party cake, chief prosecutor Marius Iacob said.

The Romanian press has been speculating that medical staff on duty at the time were holding a late St. Mary's Day celebration.

Five babies -- two boys and three girls -- died after suffering severe burns in Monday's fire at the Giulesti Maternity Hospital in Bucharest. Another six are struggling to survive, according to a spokeswoman for the Grigore Alexandrescu Children's Hospital, where they are being treated.

The fire started in an electrical cable attached to the air-conditioning unit of the intensive care room, according to prosecutors' preliminary conclusions. It quickly swept through the room, burning incubators and melting medical equipment.

Surveillance camera footage released by the government Thursday showed medical staff and parents frantically trying to enter the burning intensive care unit (ICU), using a chair to break down automatic doors that could only be opened with a card, which nobody had at the time.

The temperature inside the ICU reached more than 200 Celsius (400 Fahrenheit) degrees, Iacob said.

The investigation has revealed there was only one card to open the automatic doors, and that card was held by the nurse in charge, who had left the ICU and was not present, Iacob said.

The managers at Giulesti have been suspended until the investigation into the fire is completed, Bucharest Mayor Sorin Oprescu said Wednesday. An interim hospital manager has been appointed, he said.

Pregnant women, those in labor, and new mothers were among those eventually evacuated from the hospital.