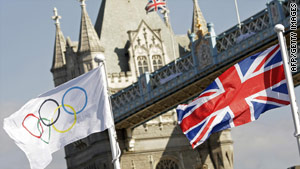 VisitBritain has come up with the tips to create a warm welcome for visitors ahead of the 2012 Olympics.
STORY HIGHLIGHTS

Those are among the tips in a new etiquette guide designed to help create a warm welcome for visitors ahead of the 2012 London Olympics.

The list was compiled by VisitBritain, the national tourism agency, and is geared to help everyone from hoteliers to taxi drivers be culturally sensitive.

"Overseas visitors spend more than £16 billion ($25 billion) a year in Britain, contributing massively to our economy and supporting jobs across the country," said Sandie Dawe, chief executive of VisitBritain.

"So giving our foreign visitors a friendly welcome is absolutely vital to our economy. With hundreds of thousands of people thinking of coming to Britain in the run-up to the Olympic and Paralympic Games in 2012, this new advice is just one of the ways that VisitBritain is helping the tourism industry care for their customers, wherever they come from."

VisitBritain staff who are natives of the countries featured wrote the list, which will now be included in an online database available to those in the tourism industry.

A sampling of their suggestions:

-- A smiling Japanese person is not necessarily happy. (They tend to smile when angry, embarrassed, sad, or disappointed.) Also avoid talking to them with your hands in your pockets, staring, being late, and blowing your nose in front of someone. While sitting, try not to show the bottom of your shoes.

-- Pouring wine backwards into a glass indicates hostility to an Argentinian. Also, don't be offended by Argentinian humor, which may mildly attack your clothing or weight.

-- Avoid winking at someone from Hong Kong, because it's considered rude. When pointing, use your hand, not your index finger. Avoid mentioning failure, poverty, or death, as this risks offense.

-- Visitors from the United Arab Emirates can take great offense if you appear bossy. They appreciate being looked after by staff trained to understand Arab culture.

-- Do not be alarmed if South Africans say they were held up by robots, which is their term for traffic lights. "Howzit" is an informal way for them to say hello. Do not place your thumb between your forefinger and middle finger, as it is an obscene gesture.

-- With Brazilians, steer clear of personal questions, especially on such issues as age or salary.

-- When meeting Mexicans, it is best not to discuss poverty, illegal aliens, earthquakes, or their 1845-46 war with America. When demonstrating height, be aware that holding the palm face down is reserved for animals.

-- Never call a Canadian an American. Some Canadians take offense at being mistaken for U.S. citizens.

-- Avoid saying "thank you" to a Chinese compliment. Instead, politely deny the compliment to show humility.

-- Don't snap your fingers if you are with a Belgian, as it may be interpreted as impolite. Also avoid discussing linguistic and political divisions within Belgium between Dutch and French speakers.

-- Avoid physical contact when first meeting someone from India. Being touched or approached too closely in initial meetings can be considered offensive, even if the intention is entirely innocent or friendly.

-- Never imply that people from Poland drink excessively. Despite stereotypes, Poles are not large consumers of alcohol and excessive drinking is frowned upon.