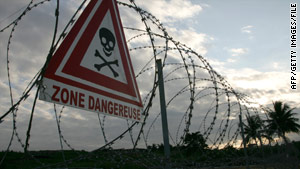 (CNN) -- The Court of Amsterdam on Friday ordered giant oil-trading company Trafigura to pay a fine of 1 million euros ($1.3 million) for illegally dumping chemical waste in Ivory Coast in 2006.

An employee of Trafigura and the captain of the ship that dumped the waste also were convicted, and the employee was fined 25,000 euros ($32,200), the court said.

The United Nations says the dumping killed 15 people and sickened about 100,000 others.

The fine was issued by a Dutch court because the ship carrying the waste belonging to Trafigura departed from the Port of Amsterdam.

A multimillion-dollar settlement was reached in September last year between Trafigura and the law firm representing people who claimed they had become sick from the toxic waste.

Despite the settlement, Trafigura denies any responsibility for the actions of the contractor that dumped the waste. It called the court's ruling Friday "incorrect."

"The court has decided that different technical legislation is applicable than that claimed by Trafigura in its defense," the company said.

It promised to study the court's findings "carefully" with a view to appeal.

The convicted Trafigura employee, whom the company named as Naeem Ahmed, "did nothing wrong," it said, adding it will provide him with legal assistance.

Amnesty International immediately welcomed the fine and said it is the first time the company has been held criminally accountable for its involvement in the waste dumping.

"This judgment appears damning given Trafigura's previous denials of any wrongdoing," said Benedetta Lacey, a special advisor to Amnesty International who has visited Ivory Coast and met victims of the dumping.

Lacey said there remain questions about the impact of the waste on the people's health, and she said the area where the waste was dumped has yet to be fully decontaminated.

Friday's fine was also for delivering products to Amsterdam that are detrimental to health, "and whose detrimental nature was concealed," the court said.

In August and September of 2006, the cargo ship Probo Koala dumped 500 tons of toxic waste belonging to Trafigura at various sites, including waterways, around the port city of Abidjan, according to the United Nations. It says the waste was a liquid sludge that contained large amounts of hydrocarbons and toxic substances including hydrogen sulfide and caustic soda.

Those who got sick complained of nausea and vomiting after inhaling fumes, the United Nations says.

The British newspaper The Guardian last year published a draft report about the scientific nature of the waste that indicated it could cause severe human health problems. The author of the report, however, said the findings in the draft were superseded by other data showing the waste caused, at worst, short-term flu-like symptoms and anxiety.

Last month, the United Nations helped set up a new laboratory in Abidjan to improve the monitoring of hazardous materials on ships entering the port, as a way to prevent toxic waste dumps there in the future.