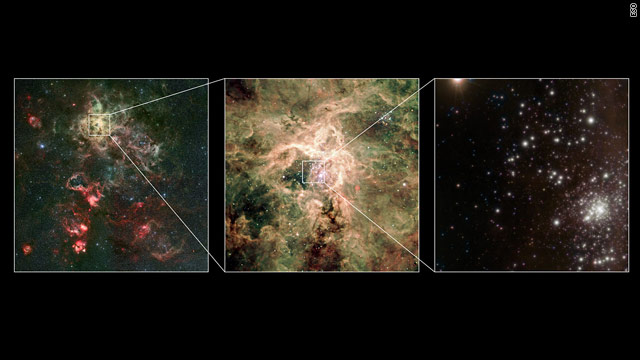 The massive star is in the Tarantula Nebula, 165,000 light years from our galaxy.
STORY HIGHLIGHTS
RELATED TOPICS

(CNN) -- Imagine a star so luminous that it would burn the Earth up if it were anywhere near, a star that outshines the sun as much as the sun outshines the moon. A monster even in the abyss of space.

The star is not some scientist's celestial dream. Astronomers used a Very Large Telescope -- the instrument's official name -- to detect the most massive star discovered to date. In scientific lingo, it's a "hypergiant."

Led by Paul Crowther, professor of astrophysics at England's University of Sheffield, the team of astronomers studied two young clusters of stars, NGC 3603 and RMC 136a.

R136a1, found in the RMC 136a cluster, is 10 million times brighter than the sun and is the heaviest star ever found, Crowther said Wednesday, with a mass that is roughly 265 times more than the sun. It was born even heavier, with a solar mass of 320. Astronomers previously thought 150 to be the upper limit.

Several of the stars studied had surface temperatures of 40,000 degrees, more than seven times hotter than the sun.

R136a1 is rare and resides in another galaxy called the Large Magellanic Cloud. Its home is more than 165,000 light years away from Earth's Milky Way galaxy. As such, said Crowther, it is not visible to the naked eye, nor with a rooftop telescope.

"Owing to the rarity of these monsters, I think it is unlikely that this new record will be broken any time soon," Crowther said.

Crowther's team used the sophisticated infrared equipment on the Very Large Telescope in a European Southern Observatory facility in Chile as well as data collected from the Hubble Space Telescope to detect the colossal star. The telescope is considered the world's "biggest eye on the sky" and is 8 meters (26 feet) in diameter.

The research was published in the current issue of the British scientific journal The Monthly Notices of the Royal Astronomical Society.

"Unlike people, these kind of stars are massive when they are babies," Crowther told CNN. "They lose weight as they get older."

At over a million years old, the star is already middle-aged, Crowther said, and could easily be a poster child for WeightWatchers, having shed a fifth of its initial mass over time because of powerful winds.

In another million years -- a brief life span compared to the sun's 5 billion years of existence -- the giant star will probably explode as a supernova. It won't be noticeable on Earth because it's so far away.

Crowther, excited about the new find, had to find simple terminology to describe it to his 6-year-old son Billy. Billy, in turn, wanted dad to name the monster star after him.

That might have sounded a whole lot better than R136a1, but nonetheless, a star is born.