Manhunt in Britain ends as fugitive kills himself 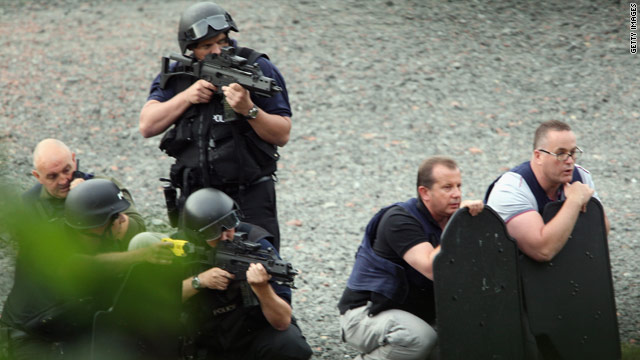 A spokeswoman at Newcastle General Hospital confirmed Moat died shortly after arriving there.

His death brought to an end a week-long manhunt that had the small northern English town of Rothbury on lockdown and dominated national news headlines.

Convinced Moat was hiding in the area, police launched a manhunt focused around Rothbury and found several sites where they believed he had been sleeping. British news outlets reported police found letters at those sites in which he made rambling threats to police.

The large-scale search involved a number of police units across Northumbria in northern England, including specialist search teams, armed response units, helicopters and dog handlers, according to police officials.

It came to a head Friday evening when police discovered a man fitting Moat's description near a riverbank around Rothbury, said Chief Superintendent Mark Dennett of the Northumbria police.

"When he was discovered, he was armed," Dennett said. "Expert negotiators were brought in to speak to him, and spoke to him extensively for several hours."

Speaking at a press conference Saturday, Temporary Chief Constable Sue Sim confirmed Moat had died after a single gunshot. She said no shots had been fired by police, but that officers had fired a taser.

"Right up until that time police officers were striving to persuade Mr. Moat to give himself up peacefully. During this time, officers discharged a taser. However, this did not prevent his death," she said.

Witnesses described seeing the man, believed to be Moat, with a shotgun-like weapon aimed at his neck while armed police gathered feet away to speak to him.

Because police had contact with Moat before he died, the incident has been referred to the Independent Police Complaints Commission, which is standard in such cases, Northumbria Police said.

"While the incident has been brought to a close, we must be mindful of the impact it has had on many lives," Sim said. "Our thoughts are with the family and friends of those affected."

British news outlets reported Saturday that police had asked for a media blackout during the investigation because Moat had threatened the public.

Among the details they were asked to keep secret was the discovery of a four-hour dictaphone recording in which Moat complained about media coverage of the manhunt, shootings, and his private life. He threatened to harm a member of the public -- perhaps journalists -- for every piece of information he perceived to be inaccurate, CNN affiliate ITN reported.

Police were concerned that reports could anger Moat and trigger further violence, the Press Association reported.

Police also asked for stories already published about his personal life to be removed from news websites, the PA said. They included stories about Moat's mother, Josephine Healey -- who hadn't seen her son in years -- saying he would be "better off dead," the PA said.

In messages posted on his Facebook page after his release from prison, Moat said he was upset that his girlfriend was with a new partner, according to British news outlets.

"Just got out the slammer," Moat wrote Friday morning, according to Channel 4 News, which said it had been given access to Moat's page.

Eleven minutes later, Moat wrote, "Lost my business. Kids to (social) services. Gonna lose my home and lost my mrs of nearly 6 years to a copper. How did a guy who had it all end up in this situation."

Police later said the man Moat killed -- his ex-girlfriend's partner -- was not a police officer.

The most recent pictures police had of Moat were taken on surveillance cameras as he shopped at a building supply store on Friday evening.

Moat's ex-girlfriend and the wounded police officer remain in the hospital.