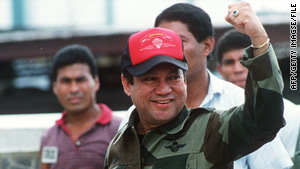 Manuel Noriega was extradited from the United States to France in April.

Noriega was extradited from the United States to France in April to face charges that he laundered drug trafficking profits of 15 million French francs, or 2.3 million euros (U.S. $2.8 million).

His lawyers, Olivier Metzner and Yves Leberquier, told reporters in front of the court that Noriega had always disclosed where his money came from.

Noriega wore a dark suit. His thinning black hair was slicked back, his shoulders hunched, and his face appeared extremely weathered.

His lawyers repeatedly emphasized that Noriega had been awarded the Legion d'honneur, a highly prestigious national award.

U.S. Secretary of State Hillary Clinton cleared the way for Noriega to be sent to France in April after he spent more than 20 years in a U.S. federal prison. The extradition came as a shock to the Miami, Florida, attorneys who have defended Noriega for more than 20 years.

For the previous two and a half years, Noriega and his attorneys had argued that the United States was violating the Geneva Convention by not sending him back to Panama, where he was seized by U.S. troops after the United States invaded Panama in 1989.

In Panama, Noriega is wanted for the murder of a political rival. Panama has requested his extradition, but the U.S. honored France's extradition request instead.

France has already convicted Noriega in absentia for money laundering but then promised him a new trial.

Panama also has convicted him in absentia and has said he would get a new trial.

While in U.S. custody, Noriega suffered from prostate cancer and had a stroke.

In an exclusive interview with CNN in March, Noriega's grandson Jean-Manuel Beauchamp said that he had grown to admire his grandfather. He was only 4 months old when the U.S. invaded Panama.

"I've spent quality time with him, but not private time," he said, alluding to prison security and the monitoring of conversations. "He's the smartest man I know. He's so friendly, outgoing, knowledgeable. He's always looking to teach or give advice."

But the U.S. government has portrayed Noriega as the ultimate crooked cop -- a man who was paid millions by the Medellin drug cartel in Colombia to protect cocaine and money shipments.