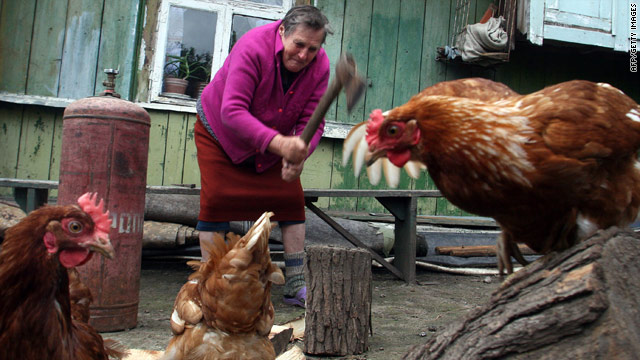 A woman chops firewood near her house in the village of Dvorischi outside Minsk on June 21.
STORY HIGHLIGHTS
RELATED TOPICS

The move comes as Russia is decreasing the amount of natural gas it sends to Belarus over what it says are unpaid debts. Belarus President Alexander Lukashenko said Russia owes Belarus $260 million for the natural gas it transports through the country, state news reported.

"I have ordered the government to close down the transit of gas via Belarus until Gazprom pays for it. They haven't paid us a penny for this in the past six months. This is a cynical and absurd situation when you owe me $260 million while I owe you $190 million, and you are closing the valve on me, Lukashenko said, according to the Belarus state-run news agency Belta.

Lukashenko's announcement came after Russian President Dmitry Medvedev ordered energy giant Gazprom to restrict gas supplies to Belarus because of what he says are unpaid debts.

Alexander Medvedev, head of exports for the company, told reporters that Gazprom would protect its customers.

"We have prepared a plan of actions should Belarus violate its transit commitments and encroach on the gas intended for our European customers. We will do everything possible and impossible so that our European clients would not suffer," he said.

Energy analysts estimate that Russia exports approximately 20 percent of its gas to Europe through Belarus. The other 80 percent transits through Ukraine.

Gas from Russia through Belarus amounts to 6.25 percent of Europe's total gas imports.

Officials from the European Commission are in close contact with Russian and Belarusian authorities over the dispute and expect "that the gas flows to the European Union will not be affected," spokeswoman Marlene Holzner told reporters Tuesday.

On Tuesday Gazprom reduced the amount of gas it sends to Belarus by 30 percent, company CEO Alexei Miller said in televised remarks. The company had already decreased its supply by 15 percent Monday over a $200-million debt Belarus has accumulated this year, he said.

Miller has said the cuts will continue daily and be "proportional to the volume of debt."

"The letter actually ends with a threat that if the gas deliveries to Belarus are further reduced, they would take actions to take gas out of the transit pipeline system in order to meet the needs of Belarusian domestic consumers," Gazprom spokesman Sergei Kupriyanov said. "The problem can hardly be resolved in a constructive way when such a tone and threats are being employed."

Belarus has refused to pay Russian gas rates of $169 per 1,000 cubic meters for the first quarter of the year and $185 for the second quarter, RIA-Novosti reported. The former Soviet republic has instead been paying $150 since Jan. 1, ringing up a large debt in the process.

In the past, other countries including Austria, Bulgaria, the Czech Republic, Germany, Romania, Greece and Turkey have complained that their gas supplies have been affected as Russia trimmed output to upstream customers like Belarus and Ukraine.

Gazprom is the world's biggest producer and exporter of natural gas -- and Russia's most powerful company.

It controls 20 percent of the world's natural gas reserves and operates the world's largest gas distribution network covering an area from Europe to the Far East, according to its website.

Gazprom exports energy to 32 countries and provides around 25 percent of the European Union's gas supplies.

Formed in 1989 to replace the Soviet Ministry of the Gas Industry, Gazprom is closely tied to the Russian government, which owns a controlling 50 percent stake in the company. President Dmitry Medvedev is a former Gazprom chairman.

In recent years, an increasingly confident Moscow has used Gazprom to assert its authority over Russia's former sphere of influence by offering heavily subsidized gas to ex-Soviet countries.

But that policy has led to disputes as Gazprom has then sought to raise prices.

Gazprom has switched off gas supplies to another former republic -- Ukraine -- several times in recent years in a row over payments and Kiev's rejection of proposals to hike rates.

Those disputes ended earlier this year when Russia agreed to a 30 percent drop in the price of natural gas sold to Ukraine, in exchange for permission to extend Russia's lease of a major naval base in the Black Sea port of Sevastopol, Ukraine, for 25 years.