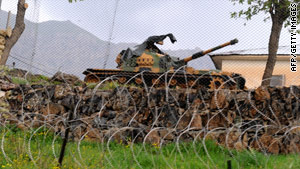 At an international military conference on Monday, the commander of Turkey's armed forces, Gen. Ilker Basbug, said that within the last 10 days, his troops had begun employing Israeli-made "Heron" drones on surveillance missions over Turkey's mountainous eastern border with Iraq.

Basbug spoke after a weekend of bloody clashes with Kurdish rebels left at least 12 Turkish soldiers stationed in this border region dead.

The fact that Turkey still depends on Israel for high-tech defense technology could complicate the Turkish government's threats to punish Israel for a botched Israeli commando raid in which eight Turks and a dual-national Turkish-American were shot dead aboard a Turkish ship carrying aid to Gaza.

After the May 31 incident, Turkey's prime minister ominously warned "nothing would ever be the same again," between the two once-close Middle Eastern allies. Recep Tayyip Erdogan has demanded that Israel apologize for what he has repeatedly labeled an act of "state terrorism" and "piracy" in the eastern Mediterranean.

Turkey withdrew its ambassador from Tel Aviv, Israel, in protest and cancelled joint military exercises with Israel. But Ankara has been careful not to sever ties with the Israeli defense industry.

The long-simmering conflict with rebels from the Kurdistan Workers' Party (PKK) has flared once again in recent months, making Turkey more dependent on Israeli military technology.

"This is another paradoxical situation ... Turkey has been reluctant to freeze defense industry ties with Israel," said Lale Kemal, a journalist who writes a column on military affairs for the Turkish newspaper Zaman.

"You need equipment to fight against asymmetric warfare. These are attack helicopters, surveillance systems such as UAV's [Unmanned Aerial Vehicles], intelligence systems and satellites ... and Turkey doesn't produce any of these systems."

When asked on Monday whether Israeli technicians and engineers had to cut short training on the new drones due to the recent rift in relations, Basbug insisted Turkish operators were adequately prepared to pilot the Herons.

"Now our own personnel, our air force, is using the Heron systems that we bought," Basbug said. "They got the training, it is over. We are capable, we have started using them."

Basbug added that the Israeli-made drones are being sent into Iraqi airspace, in coordination with the U.S. military, to gather intelligence on PKK rebels who have long operated out of remote mountain camps on the Iraqi side of the border. According to the Turkish military, at least 55 of its soldiers have been killed in clashes with PKK fighters since the beginning of March.

Over the last week, Turkish warplanes have carried out several air raids against suspected rebel targets in northern Iraq.

On March 16, the Turkish military said hundreds of Turkish troops made an incursion several kilometers into Iraqi territory in "hot pursuit" of PKK militants.