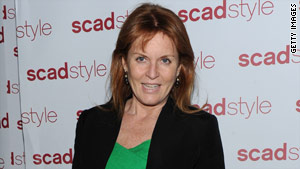 Sarah Ferguson, the Duchess of York, is the ex-wife of Prince Andrew, a U.K. trade envoy.
STORY HIGHLIGHTS

London, England (CNN) -- A British tabloid posted a video on its Web site Sunday that appears to show Sarah Ferguson, the Duchess of York, accepting money from an undercover reporter in exchange for access to her ex-husband, Prince Andrew, a U.K. trade envoy.

Ferguson is also filmed on hidden camera telling the News of the World reporter -- who was posing as a wealthy businessman -- that a payment of 500,000 pounds ($723,000) "opens doors" to Andrew. She then shakes hands with the reporter after he accepts the deal.

In a statement issued Sunday, Ferguson apologized for the incident.

"I very deeply regret the situation and the embarrassment caused," the statement said. "It is true that my financial situation is under stress, however, that is no excuse for a serious lapse in judgment and I am very sorry that this has happened."

The tabloid said its reporter and Ferguson met on two occasions, once in New York and another time in London.

In the heavily edited, roughly four-minute video, Ferguson appears to accept 40,000 pounds ($58,000) as a down payment for a meeting with Andrew, then later discusses a wire transfer of the larger sum.

"If we want to do a big deal with Andrew, then that's the big one," she says.

When asked how she would receive the 500,000 pounds, she tells the reporter, "You send it to the bank account that I tell you to send it to."

The tabloid said Prince Andrew, who has been the U.K.'s special representative for international trade and business since 2001, was not aware of the deal.

In the video, Ferguson tells the reporter that Andrew "never does accept a penny for anything. ... He does not and will not and he is completely whiter than white."

In her statement Sunday, Ferguson confirmed Andrew, the Duke of York, "was not aware or involved in any of the discussions that occurred. ... The Duke has made a significant contribution to his business role over the last 10 years and has always acted with complete integrity."