Analysis: Why is Baltasar Garzon so divisive? 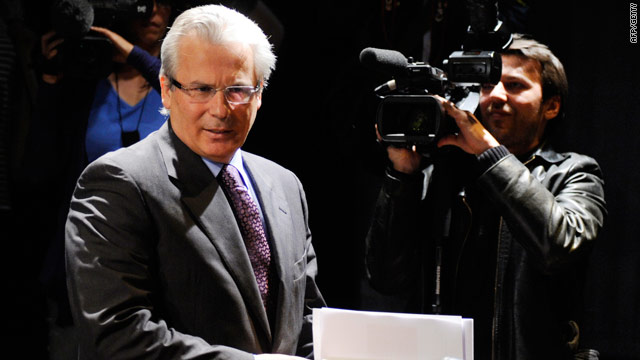 Madrid, Spain (CNN) -- In his 22 years on the bench, Spain's Judge Baltasar Garzon has garnered many admirers for his groundbreaking work on international human rights cases, but also many enemies, including suspects he's jailed and politicians he's offended.

So on the eve of Friday's decision by Spain's judicial authority to suspend Garzon from the bench for alleged abuse of power - pending his trial at the Supreme Court - Garzon attended an event in Madrid where a throng of TV cameras and reporters were waiting.

"I am facing this calmly, knowing that I am innocent," Garzon told reporters. "And since I respect the law, I will accept the decision (on Friday) and continue with my defense so that the true situation is absolutely clear."

It was Garzon's chance to make sure his position was absolutely clear before the decision on Friday. He is no stranger to the media, and some Spaniards consider his personal style -- often described as flamboyant -- as unbefitting a judge.

Legal experts said the suspension of Garzon was required of the judicial authority -- and therefore widely expected -- given that Garzon is under indictment for allegedly overstepping his judicial authority in his investigation of human rights abuses under Spain's former dictator, Francisco Franco. No trial date has been set.

For weeks, there has been an outpouring of public support for Garzon in Spain and abroad, including in Argentina, whose former military regimes have come under Garzon's investigation as well for human rights abuses.

His most famous case internationally was against former Chilean dictator Augusto Pinochet, starting in 1988, when Pinochet was arrested in a London hospital on a warrant from Garzon.

So many in Spain considered that after the Argentina and Chile investigations, the logical next step would be the darkest taboo of all --- Franco's dictatorship. Mass graves were already being unearthed by people searching for the remains of their relatives when Garzon got involved a few years ago.

But then his enemies appeared -- a far-right group called Manos Limpias (Clean Hands) charged that Garzon knew there was an amnesty law in Spain approved after Franco died in 1975, and therefore the subject was untouchable. Spain should move forward, and not relive its painful past.

Years earlier, Garzon riled many Socialists here -- briefly serving in a Socialist government in the 1990s before quitting, only to return to the court and investigate wrongdoing involving some Socialists.

Born to a humble farming family among the olive groves of southern Spain, Garzon worked at a gas station to help pay for law school.

But when it came time to find votes among Spain's judicial authority to avoid the suspension, he came up short.

His next move? He's asked to work as an external adviser to the International Criminal Court at The Hague, Netherlands. But the judicial authority late Friday postponed a decision whether to let him do that.

So he went back to the courthouse, which he had already left at midday Friday to a round of applause from co-workers. And when he came out a second time, around 9pm local time, there were hundreds of supporters in the street cheering him on.

And a police cordon guarding him. Stepping into a car with his bodyguards, he blew a kiss to the crowd. A classic Garzon exit.