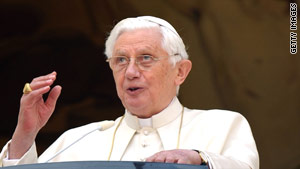 Rome, Italy (CNN) -- Pope Benedict XVI will not call off a trip to Great Britain despite a leaked Foreign Office memo that made "foolish" suggestions about things he could do while there, the pope's spokesman reiterated on Monday.

"As far as the Vatican is concerned, the case is closed. There never was the slightest doubt about the trip," the Rev. Federico Lombardi told CNN.

The British government apologized over the weekend for the Foreign Office memo suggesting that the pope could launch Benedict-brand condoms or bless a gay marriage when he visits the United Kingdom later this year.

When does a joke go too far?

Many of the ideas in the document are "clearly ill-judged, naive and disrespectful," the Foreign Office said in a statement Sunday, which referred to the memo as "foolish."

Jack Valero, a spokesman for the Catholic Bishops' Conference of England and Wales, called the memo a "joke that's gone out of control."

Richard Dawkins, the British scientist and noted atheist, has threatened to try to have the pope arrested when he visits the United Kingdom.