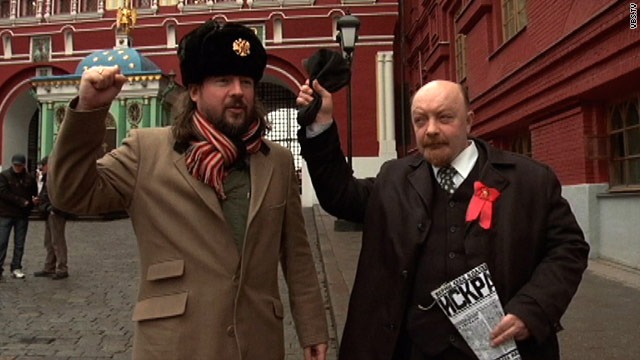 Editor's note: The staff at CNN.com has recently been intrigued by the journalism of VICE, an independent media company and Web site based in Brooklyn, New York. VBS.TV is the broadband television network of VICE. The reports, which are produced solely by VICE, reflect a transparent approach to journalism, where viewers are taken along on every step of the reporting process. We believe this unique reporting approach is worthy of sharing with our CNN.com readers.

Brooklyn, New York (VBS.TV) -- In this installment of the Vice Guide to Film, VBS co-founder Shane Smith travels to Russia to meet the pioneers of one of the most peculiar experimental film movements in history: Parallel Cinema.

The genre marries Soviet avant-garde agitprop filmmaking (black and white, silent, odd angles, extreme closeups, rapid fire editing of good Soviets at work) with something called "Necro-realism," a movement spearheaded by filmmaker Yvegny Yufit and consisting of very weird gay male zombie flicks that feature fat bald men having sex and eating each other's brains. It was meant to be a comment on the impending fall of the Soviet system and the decadence of the apparatchiks in charge. It grew to become much more.

While Russia is known for its experimental works of the 1920s -- auteurs like Dziga Vertov and Sergei Eisenstein spring to mind -- this freedom of expression ended when Stalin took power. For 60 years, Russian film was dominated by the drab, state-approved imagery of Socialist realism. This genre was defined by stark scenes of the proletariat soldiering and toiling diligently over the land. Making movies outside this milieu meant that the film-lovers, artists, actors and rock musicians who collaborated to create it were risking life and limb at the hands of the KGB. But when the Soviet Union collapsed, the threat of its primary intelligence agency diminished and Russian filmmakers began to unleash six decades of pent-up creative energy. The films that emerged were an insane mish-mash of booze, violence, surrealism and insanity. Parallel Cinema was born.

Watch the rest of Russian Parallel Cinema at VBS.TV

For this episode, Shane journeys to Moscow and St. Petersburg to meet several of the surviving founders of Parallel Cinema and Necro-realism, many of whom are today extremely successful commercial producers and directors. In fact, a few of them now run some of the country's key networks and continue to make films. Shane manages to uncover this fascinating underground art community and finds that to this day the Parallel Cinema movement thrives. The devoted still have weekly Parallel screenings and events, and even put out a monthly film publication. Still, as he immerses himself in this unique film tradition, it becomes clear that, given Russian's present volatility, it may not exist much longer.