Security tight at trial linked to al Qaeda in Belgium 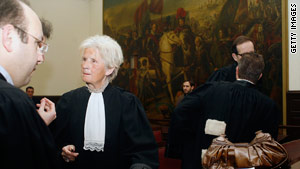 (CNN) -- Belgian police have mounted an unprecedented security operation outside the Brussels courtroom where nine members of an alleged terrorist cell linked to al Qaeda are on trial.

The security alert followed an announcement by Belgian authorities last weekend that they had information indicating that an armed attack to free the defendants or an escape attempt may be in the works.

One of the defendants, Malika El Aroud, has a high profile in pro-al Qaeda circles. El Aroud is the Belgian-Moroccan widow of Abdessattar Dahmane, a Tunisian al Qaeda operative who was involved in the assassination of anti-Taliban Northern Alliance leader Ahmed Shah Massoud on Osama Bin Laden's orders two days before 9/11. Dahmane's comrade used a suicide bomb vest to set off an explosion, which Dahmane survived, but he was later shot dead by Massoud's guards when he ran.

Prosecutors Monday confirmed to the court that authorities had reason to believe there was a threat of an attack but did not elaborate, said Christophe Marchand, the attorney for one of the defendants. Belgian authorities Sunday released a statement outlining only "serious elements and high probabilities."

The extra security includes the placement of barricades and several large bulldozers in front of the court building. Dozens of heavily armed police have been on patrol outside, wearing masks to camouflage their identity.

"It feels like a war zone," Marchandsaid, "the security measures suggest the authorities fear a suicide bombing attack."

A senior Belgian counter-terrorism source briefed on the threat alert said Wednesday that the threat information was obtained by Belgian police over the weekend, but the source played down the threat of imminent attack, saying that the new security measures were taken out of an "abundance of caution."

With police on high alert, the courtroom was evacuated Tuesday when gas fumes could be smelled in the vicinity of the courtroom, but after a security sweep, the trial resumed.

El Aroud is accused of being a leader of a terrorist group that recruited young men in Belgium and France to receive terrorist training in al Qaeda camps in Pakistan. She was arrested in December 2008 after security services intercepted an e-mail indicating that one of the young men she allegedly recruited may have been planning a suicide attack in Brussels.

The individual in question, Hicham Beyayo, who was arrested the same day as El Aroud and is also on trial, has denied that the e-mail represented any hostile intent, and has said it was just tough talk to impress an ex-girlfriend.

El Aroud's current husband, Moez Garsallaoui, is also a defendant in the trial. Garsallaoui is being tried in absentia, with Belgian intelligence officials believing he is still at large in the Afghanistan-Pakistan border region.

She did not show up in court Wednesday, stating that the new security arrangements had worsened her agoraphobia, a condition in which individuals fear being in locations or situations from which they cannot easily leave or escape.

During the trial, El Aroud has mounted a strident defense of the legitimacy of armed combat against Western military forces in Iraq and Afghanistan, but she denied involvement with terrorism.

El Aroud has not kept secret her sympathy for al Qaeda. In a CNN interview in 2006, El Aroud said, "Most Muslims love Osama [Bin Laden]. It was he who helped the oppressed. It was he who stood up against the biggest enemy in the world, the United States. We love him for that."

The trial, which started on March 8, is expected to conclude Friday with verdicts and sentencing expected four to six weeks later.