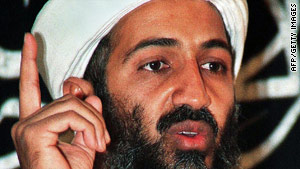 (CNN) -- A Belgian woman on trial in Belgium for involvement in terrorism says her husband -- himself wanted on terror charges -- met al Qaeda leader Osama bin Laden in the summer of 2008.

Christophe Marchand, a defense attorney at the trial, told CNN that Malika el Aroud made the claim during testimony Thursday. Marchand said el Aroud was questioned about an e-mail exchange in summer 2008 she had with an alleged jihadist now in French custody.

In that exchange, el Aroud said that her husband, Moez Garsallaoui, had sent her an e-mail in which he said he met with "the chief" in a mountainous region.

The judge at her trial asked whether she meant bin Laden -- to which el Aroud replied, "Yes." Marchand said el Aroud gave no other details about the reported meeting, and the e-mail was not produced in court.

Belgian intelligence sources said Garsallaoui, a Tunisian citizen, is believed to be at large somewhere in the Afghanistan-Pakistan border region. Garsallaoui is alleged to have acted in tandem with his wife to recruit six individuals from Belgium and France to make the journey to al Qaeda's camps in Pakistan's Waziristan. Several of them are now on trial with Malika el Aroud.

There have been no confirmed sightings of bin Laden since he escaped from Tora Bora in Afghanistan in December 2001. While the working assumption of Western intelligence agencies is that he is somewhere in the Afghanistan-Pakistan border region, it is thought few al Qaeda members know his location.

One alleged member of the Belgian-French group that traveled to the region, Walid Othmani, reportedly told French interrogators that no recruits were allowed to meet al Qaeda's leader because of security concerns.

In June 2008, around the time el Aroud said he met bin Laden, Garsallaoui wrote to his wife, claiming to have killed several Americans in Afghanistan, according to Belgian legal documents. U.S. counterintelligence intercepted that e-mail.