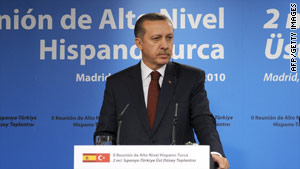 Erdogan, speaking at a news conference during an official visit to Spain, gave no further details on the Monday arrests and said it would not be right for him "to comment on a legal matter."

The Turkish media reported police detained the former chiefs of the air force and navy along with a dozen former and current members of the Turkish military Monday.

Their detentions were said to be part of an investigation into an alleged plot called the "Sledgehammer," or "balyoz" in Turkish, against the ruling Justice and Development Party, known by its initials in Turkish as AKP.

Police have also been searching various locations including the homes of the former generals and the headquarters of several foundations, the semi-official Anatolian News Agency said.

Relations between the ruling AKP, which has its roots in political Islam, and Turkey's secular military have been tense over previous detentions of military personnel in relation to several alleged coup plots.

The "Sledgehammer" plan, which was first reported by Taraf newspaper, allegedly involved provoking chaos in the country by planting bombs in mosques and museums.

The Turkish Armed Forces denied there was such a plan and said documents published by the newspaper were parts of a military training seminar.