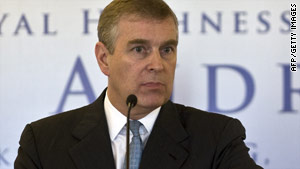 A spokesman for the Metropolitan Police did not name anyone involved in the incident, but Buckingham Palace confirmed Prince Andrew was the driver of the car.

It happened as the policeman tried to move two Japanese tourists out of the way of Andrew's 4x4 car at the palace, the BBC reported. The officer hurt his arm in the incident and complained to his superiors, the BBC said.

"It was a minor incident and the police are looking into it," said a palace spokesman, who by custom is not named.

Police refused to confirm any details of the incident, including when it allegedly happened. The BBC quoted a police spokesman as saying the officer's injuries were "minor."

The prince, who is a week shy of his 50th birthday, lives at Royal Lodge in Windsor, just west of London.

Prince Andrew is Queen Elizabeth's second son after Prince Charles and is also called the Duke of York. He served as a helicopter pilot in the Royal Navy for 22 years and is currently Britain's special representative for international trade and investment.