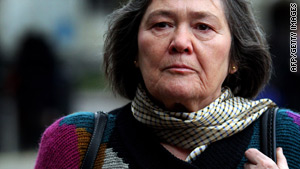 Clare Short, who was Blair's international development secretary until she quit over the Iraq invasion, said Attorney General Peter Goldsmith withheld his own "doubts and changes of opinion" in giving the go-ahead for war.

"I think he misled the Cabinet. He certainly misled me, but people let it through," Short told an inquiry into Britain's role in the March 2003 Iraq invasion.

Short said that Goldsmith, who last week testified before the inquiry that he was initially ambivalent but later adamant over the legality of the war, was wrong to press the case.

Goldsmith initially advised Blair in January 2003 that it would be unlawful to invade Iraq without a United Nations Security Council resolution but changed his mind a month later.

"I think for the attorney general to come and say there's unequivocal legal authority to go to war was misleading."

Short said Goldsmith was "leaned on" by Blair to agree to the war.

"Lord Goldsmith said he was excluded from lots of meetings -- that's a form of pressure.

"It was suggested to him that he go to the U.S. to get advice about the legal position.

She added: "I think all that was leaning on -- sending him to America, excluding him and then including him."

Blair denied claims he had struck a secret deal with U.S. President George W. Bush in 2002 pledging British backing for the invasion and said he believed "beyond doubt" his unfounded pre-war claim that Iraq was capable of launching chemical and biological weapons within 45 minutes.

Blair: No 'covert' deal with Bush over Iraq

Analysts say involvement in the Iraq war remains a "live political issue" in the UK, because the same government -- now led by Gordon Brown -- was still power, whereas the parties of other leaders in the U.S. and Australia have been voted out of office.

"The others have faced critical public scrutiny and been damaged by that," legal expert Glen Rangwala of Cambridge University told CNN. "The British haven't had a change of administration so in many ways it remains a live political issue because it reflects on people who are in government."