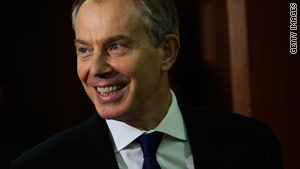 Blair said last month he supported regime change in Iraq even without evidence of weapons of mass destruction.
STORY HIGHLIGHTS

Blair said in an interview last month that he would have removed Saddam Hussein even without evidence of weapons of mass destruction in Iraq.

The inquiry is running independent hearings looking into the decisions that led up to the 2003 invasion and governed Britain's involvement in the war.

Blair's former spokesman denied last week that intelligence had been "sexed up" to promote the case for war.

Alastair Campbell also testified that his former boss was determined to disarm Iraqi leader Saddam Hussein. But he told the Inquiry Blair had never been in a "rush to war" and that he regarded military action only as a last resort.

"Would someone like Tony Blair, from the day he went into politics, think that somebody like Saddam Hussein should be got rid of? Yes, he would. Was that the policy he was pursuing the whole way through? No," Campbell told the inquiry.

Inquiry members pressed him hard on a 2002 British intelligence document that claimed Iraq could launch weapons of mass destruction within 45 minutes -- a key piece of the Blair government's case for war.

"At no point did anybody from the prime minister down say to anybody in the intelligence services, say 'Look, you've got to sort of tailor it to fit this argument, that argument," Campbell said.

The intelligence document came out in September 2002 and detailed the threat posed by Iraq. It is most famous for saying that Iraq could "deploy chemical or biological weapons within 45 minutes of an order to do so."

The document came as Blair was finding fewer and fewer chances for a diplomatic solution on Iraq, and he had to convince the British public of the threat Saddam posed.

Presenting the intelligence dossier to Parliament and the public was a way of engaging them in his decision-making, Campbell said.

Campbell said he worked on the dossier with John Scarlett, the former head of MI6, the British foreign intelligence agency. Scarlett testified at the inquiry last month that it was he who wrote the dossier.

British media quickly highlighted the 45-minute claim; it filled the headlines of British newspapers the next day. But less than a year later, after coalition forces had entered Iraq, the media began to question it.

In May 2003, a BBC report accused the government, and Campbell in particular, of pushing for the dossier to be "sexed up" to exaggerate the Iraqi threat.

Campbell testified that it was intelligence officials who had the final say over any claims made in the dossier, and that Scarlett "had the single pen" for writing it.

Testifying about the dossier last month, Scarlett said, "There was absolutely no conscious intention to manipulate the language or to obfuscate or to create a misunderstanding as to what they might refer to."

The inquiry, which began hearings in late November, is the most thorough investigation yet into the decisions that led up to the war.

It cannot find anyone criminally responsible, and it cannot even apportion blame, but inquiry members will be able to judge the legality of the conflict and identify lessons learned from Britain's involvement.