By Manesh Shrestha, For CNN 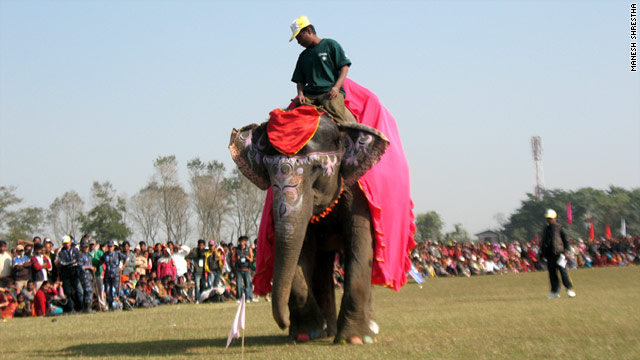 Sauraha, Nepal (CNN) -- The beauty pageant was like any other, with decked-out contestants parading on a catwalk and undergoing intelligence tests.

Hygiene and good health were important, along with physical stature.

But the pageant held Monday and Tuesday in a Nepal wildlife resort town was not for young women -- it was for elephants.

In the competition, the first such in the nation, a svelte 28-year-old walked away with the prize after defeating two other finalists.

The mahouts -- the elephants' keepers -- worked hard on their charges' looks. The pachyderms were bathed, their hard skins scrubbed and their foreheads oiled. The mahouts also drew patterns on the elephants' faces and ears.

Of the three finalists, the youngest won. Chanchalkali, which translates as "playful beautiful," looked resplendent in a light red gown that covered her hulk of a body. Her nails were painted different colors and her forehead was covered with red cloth.

"I think she won because I worked hard on her," said her mahout, 46-year-old Prabhu Chaudhary, after the result was announced. "The fact that she was younger than her competitors also helped."

She behaved well, too, he added.

The elephants are among about 100 domesticated by the government and private owners at the edge of the Chitwan National Park in southern Nepal bordering India. The Elephant Beauty Pageant was part of the three-day Chitwan Elephant Festival, which ended Tuesday.

Only six elephants participated in the competition, according to its organizers, because they were the healthiest, but also because the organizers were not sure how the inaugural Elephant Beauty Pageant would turn out.

The elephants were judged on their intelligence and appearance, the same criteria that women contestants are judged in beauty pageants, according to Lal Bahadur Bhandari, one of the brains behind the beauty contest.

The five judges were given 10 different criteria to judge the elephants, including whether they were able to obey simple commands of their mahouts, their posture and appearance in walking about 25 meters (82 feet), their cleanliness, their nails, their ears, the smoothness of their skin and their make-up.

The two other finalists -- Dhirendrakali, draped in green, and Basantakali, draped in pink -- were 35 and 40 years old, respectively. The three finalists were chosen among six that participated in the preliminary round held on Monday. The youngest among the six was 5, the oldest 65.

"We looked behind the ears to see how much sores they had," said Radha Krishna Shrestha, one of the judges. "A lot of sores would mean that their mahout had hit them a lot to tame them."

He said the judges were happy with the elephants' general appearance and their ability to obey instructions, such as picking up a flag stuck on the ground, sitting down or standing up.

"But their nails could have been better," he added. Chanchalkali was the only one whose nails were painted.

Local hotel owners began organizing the elephant festival in 2004, starting with an elephant race, when the 10-year insurgency launched by Nepal's Maoist rebels, who were aiming to end the nation's monarchy, was at its peak and tourism had taken a tumble.

"We wanted to attract domestic tourists and came up with this idea," said Ghanshyam Shrestha, a Sauraha hotelier who organized the festival. "Our second objective was to raise awareness among the local people about the importance of wild animals, as poaching was heightened during the insurgency."

The festival has been a great hit and attracts more than 100,000 people over three days, most of them Nepalis. Besides the elephant events, bull cart, horse cart and canoe races take place.

A total of 20 elephants participated in this year's elephant 300-meter (984 feet) race with various organizations sponsoring the participating elephants. The first heat brought down the number to 12, and six finalists were chosen Monday after two semi-final rounds.

Champakali, who won the race on Tuesday, covered the distance in 1 minute 13 seconds, the organizers said.

But the festival's biggest draw was the football tournament, where thousands cheered the clumsy elephants driven by mahouts as they attempted to score goals on a 70-meter by 30-meter (229 feet by 98 feet) pitch.

The elephants trained for the football tournament for three months, organizers said.

"We wanted to add something new this year, and that was the beauty pageant," said hotelier Shrestha.