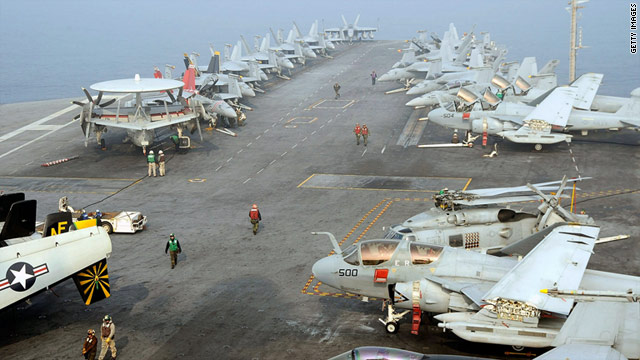 Seoul, South Korea (CNN) -- South Korea's new defense minister said his country would respond with airstrikes if North Korea attacks it again, South Korean state media reported Friday. It is some of the strongest rhetoric since the conflict broke out late last month.

"We will definitely air raid North Korea," Kim Kwan-jin said at his confirmation hearing when asked how the South would respond if struck again, according to the official Yonhap News Agency.

Kim was appointed defense minister last week amid growing tensions on the Korean peninsula following an exchange of gunfire between the two sides.

His comments reflect a potential shift in South Korea's policy toward provocations from the North. Previously, South Korean President Lee Myung-bak warned of severe consequences if the North launched another attack, but declined to name specifics.

"If the North commits any additional provocations against the South, we will make sure that it pays a dear price without fail," he said in a nationally televised address Monday.

Han Park, an expert on North Korea who has visited the country more than 50 times, called Kim's comments "an important development."

"The use of airstrikes is quite significant," said Park, a professor at the University of Georgia and director of the school's Center for the Study of Global Issues. "Just sending bullets from South Korea is one thing but sending aircraft over North Korea is something else."

However, he cautioned that the ramped-up rhetoric is "almost entirely for domestic consumption" as the South deals with criticism over what some have called a weak response to the North's November 23 shelling of South Korea's Yeonpyeong Island. The attack killed four South Koreans -- two civilians and two military personnel -- and the South returned fire.

The country's defense minister at the time, Kim Tae-young, resigned last week after the exchange of fire.

"The climate is that the South Korean military did not respond strongly enough to the original attack, and that really led to the resignation of the defense minister," Park said. "So the new candidate for the job is expected to show strong resolve and determination in the strongest terms possible."

Last month's attack was the first direct artillery assault on South Korea since 1953, when an armistice ended fighting.

The North accused the South of provoking the attack because shells from a South Korean military drill landed in the North's territorial waters along the region's tense maritime border in the Yellow Sea.

Kim Kwan-jin criticized the South's response to the attack, saying Friday that military officials should have ordered immediate airstrikes after the shelling, according to Yonhap.

He also said the military missed intelligence pointing to a possible attack by the North.

Meanwhile Friday, the South made preparations to begin new live-fire drills along five islands in the Yellow Sea -- including Yeonpyeong -- in an effort to deter future provocations from the North, Yonhap reported. The move threatens to further stoke tensions with the North.

The live fire drills are a routine monthly exercise aimed at securing the safety of ships in the area, the South's Joint Chiefs of Staff told CNN earlier this week. They were originally scheduled to begin Monday, but Yonhap reported that authorities have not determined the exact timing. One Joint Chiefs of Staff official was quoted by Yonhap as saying the South hopes to resume the drills "as soon as possible."

North Korea previously warned that joint military drills between the United States and South Korea could lead to "all-out war any time."

"If the U.S. and the South Korean war-like forces fire even a shell into the inviolable land and territorial waters of the (Democratic People's Republic of Korea), they will have to pay dearly for this," the Korean Central News Agency reported.