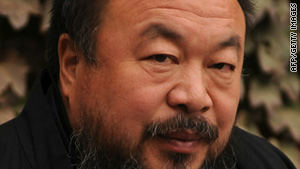 Chinese artist Ai Weiwei was waiting for his plane at Beijing airport when police officers stopped him.

Police officers stopped Ai Weiwei at his gate at the Beijing airport Thursday night, shortly before he was to board a flight to Seoul to plan an upcoming exhibition.

"They showed me a handwritten note that said my departure would endanger state security," he told CNN, adding that he had declined to attend the ceremony due to a scheduling conflict.

"This has never happened to me before -- and it was such a barbarian act that disrespected the law," Ai said of the authorities' travel ban. "It only highlighted China's abysmal human rights record and reinforced the message why Liu Xiaobo deserves the peace prize."

Liu, a writer and pro-democracy activist, is serving an 11-year sentence for "inciting subversion of state power." The Norwegian Nobel committee awarded him this year's peace prize, which is scheduled to be presented at a ceremony in Oslo on December 10.

China cracking down on dissidents

Beijing has responded furiously to the Nobel committee's choice, calling the decision a Western plot to demonize China. Officials have repeatedly warned other countries not to attend the ceremony.

"European nations are facing these choices now -- do they want to be part of the political game? Or do they want to act responsibly and develop friendly ties with the Chinese government and people?" Cui Tiankai, a vice foreign minister, told journalists last month.

"It they make the wrong decision, they will have to take responsibility for the consequences," he added.

Liu Xia, Liu Xiaobo's wife, has been under house arrest since the Nobel announcement on October 8. Police have completely cut off her communication with the outside world -- including phone and Internet access -- forbidding her from even contacting her husband's lawyers.

"This is just extraordinary," said Shang Baojun, one of Liu Xiaobo's lawyers. "We initially received some information on her from her family -- but not in the past month."

"She is under very close surveillance, which makes it difficult for her to see even her brother and parents."

The authorities have widened their targets to restrict the movements of many other prominent figures, especially those who the government considers likely to attend the Oslo event.

Other than Liu Xia and her family, a wide array of Chinese intellectuals have run into trouble at passport agencies or airport terminals.

Shang, the lawyer, said police refused to renew his Hong Kong travel permit while his colleague Mo Shaoping was recently denied check-in for an international flight. Mo, a long-time legal counsel and personal friend of Liu Xiaobo, was heading to London for a long-planned conference.

Officials intercepted Mao Yushi, a famous economist, at the Beijing airport Wednesday and barred him from going to Singapore for a meeting.

Mo and Mao were among the first to sign Charter 08, a manifesto calling for political reform and human rights in China co-authored by Liu that landed him in prison. Both said they had rarely seen their personal freedoms curtailed this way before -- and Mo even contemplated suing the border police.

With artist Ai becoming the latest victim of the travel ban, human rights watchers say, if China intends to minimize the embarrassment brought by the award ceremony, such measures will only backfire.

"The method itself is not new, but what's new is the prominence of the people they are targeting this time," said Nicholas Bequelin, a Hong Kong-based researcher with Human Rights Watch.

"If people were wondering, do human rights in China matter? This is a timely reminder of how bad things are in the country."

China hands out own peace prize