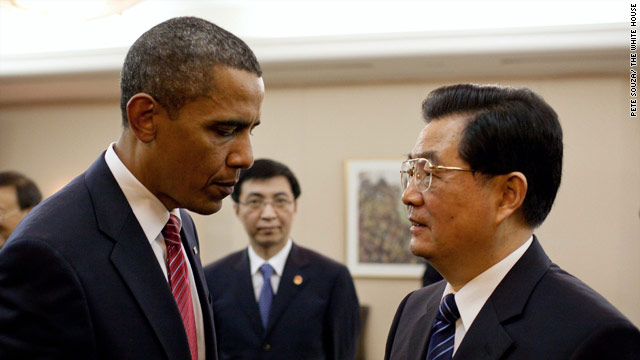 President Obama and Chinese President Hu Jintao met at the G-20 summit. They plan to talk again about the Korean crisis.
STORY HIGHLIGHTS

Washington (CNN) -- With top U.S. officials continuing to declare that help from China will be key in calming tensions between North and South Korea, President Obama is planning to call Chinese President Hu Jintao in the next few days to discuss the critical situation, according to senior administration officials.

The phone call will come just days after Obama held a bilateral meeting with Hu on the sidelines of the G-20 summit in Seoul, South Korea, where administration officials were quick to tout the fact that it was the seventh face-to-face meeting the two leaders have had since Obama took office.

Obama is also to planning to host Hu for an official visit to Washington in early January, but the relationship will be tested much sooner with U.S. officials already putting not-so-subtle public pressure on China to step up now to cool tensions on the Korean Peninsula.

U.S. officials say China's help is key in getting North Korea to ratchet down the crisis caused by Pyongyang's deadly strike on a South Korean military installation.

Adm. Mike Mullen, chairman of the Joint Chiefs of Staff, said Wednesday in a CNN interview that, "It's really important that Beijing lead here" to help diffuse the situation because of its ability to break through and communicate with the secretive North Korean regime.

"I've believed for some time that probably the country that can influence North Korea the most is -- is clearly China," Mullen said in an interview for this weekend's edition of CNN's "Fareed Zakaria GPS."

Mullen also alluded to China's desire for stability in the region, as well as its economic ties to North Korea, by saying that "China has as much to lose as anybody in that region with the continuation of this kind of behavior and what the potential might be."

Even before the crisis, U.S. officials have been very careful to downplay any tensions with China that have flared up over issues like currency reform in order to show a united front.

Donilon insisted to reporters "there was not any kind of heated exchanges" on currency or any other issues when Obama and Hu sat down face-to-face earlier this month.

"With respect to the tone or temperature in the meeting, I didn't find anything being any more heated than I had seen in prior meetings, frankly," Donilon said then. "So I don't think that there was any kind of lecturing back and forth. It was a good discussion back and forth about a range of issues."