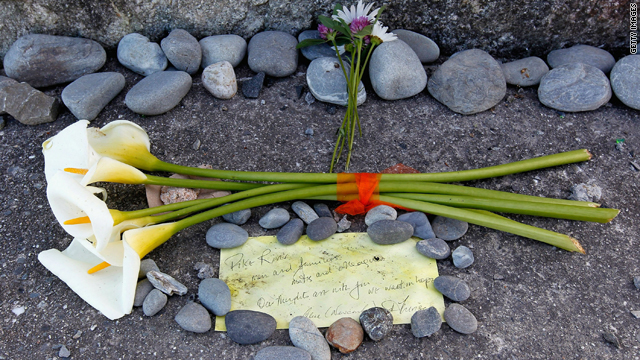 Flowers and a note lay at the foot of the Strongman Mine Memorial on Monday in Greymouth, New Zealand.
STORY HIGHLIGHTS

(CNN) -- The robot dispatched to search for signs of life in the New Zealand coal mine where 29 miners are trapped has broken down inside the tunnel, and families of the men are "extremely frustrated," police said Tuesday.

The military-operated probe was expected to be a key part of the search for any survivors of a Friday-afternoon explosion. But the operators reported that the robot had stopped working about 550 meters (1,800 feet) into the tunnel, Gary Knowles, superintendent of the Tasman Police District, told reporters Tuesday morning.

Knowles said authorities are trying to bring in a similar device from either the United States or Australia. But the families of the missing men were "extremely frustrated" after an 8 a.m. (2 p.m. Monday ET) briefing by authorities, he said.

"And I can understand their frustration as to the time it's taken to have a rescue," he added. But he said safety is his "paramount" concern in the rescue attempts.

'Looking at all options' with miners

No one has heard from the men -- ages 17 to 62 -- since Friday's explosion. Workers are trying to drill a hole down into the mine to contact the men, but a potentially explosive mix of gases inside has made it too risky for human rescuers to enter.

"I can't express the frustration that our guys feel about not being able to go underground," said Trevor Watts, general manager of New Zealand Mines Rescue. "It is heart-wrenching."

Crews are listening for any sign of noise underground that might indicate the miners are still alive. But Knowles added, "The longer it goes on hopes fade, and we have to be realistic."

And Peter Whittall, CEO of mine owner Pike River Coal, said the wait "is getting more difficult" for the families.

"It's getting very hard for them to listen without definitive change," Whittall said. "They're under a lot of stress. They're really struggling."

Whittall said drill crews have bored 142 meters (about 465 feet) into the earth, but had to stop overnight after encountering hard rock. The drill could break through by mid-afternoon Tuesday, he said.

Once the 6-inch-wide hole breaks through, rescue workers will be able to collect gas samples and other data from a new area of the mine, providing information that could aid in the rescue. Workers also expect to put laser imaging gear down the hole so they can see what it looks like inside the mine, which is located on the west coast of southern New Zealand, between Greymouth and Reefton.

Mineworkers have cleared a site for a second hole, closer to where the miners are expected to be, and drilling on that hole could begin soon, Whittall said. But "We can't stick a drill hole wherever we want," he added.

"This is extremely difficult topography. We're putting holes where we can, to get the data we can," he said.

Most of the missing are from New Zealand, but there also are miners from Australia, Scotland and South Africa in the group. Rescuers are holding out hope that the men are breathing fresh air in a ventilation shaft, and they say they are committed to searching until they find the miners.

But while drinking water is available inside the mine, the trapped men likely brought only enough food for a single day. And the missing men had been spread throughout the mine, with about half likely to have been in one area, Whittall said.

Two of their colleagues escaped the mine soon after the explosion by walking out through a tunnel, the mouth of which is about 2.2 kilometers (1.4 miles) from where the 29 missing men might be.

"We owe it to the men that are underground, that in undertaking the rescue we do it in a way that doesn't endanger their lives any further," Prime Minister John Key told reporters Monday. "We're going to get through this and do everything we possibly can to get the men out alive."