Suu Kyi has long-awaited reunion with son in Myanmar 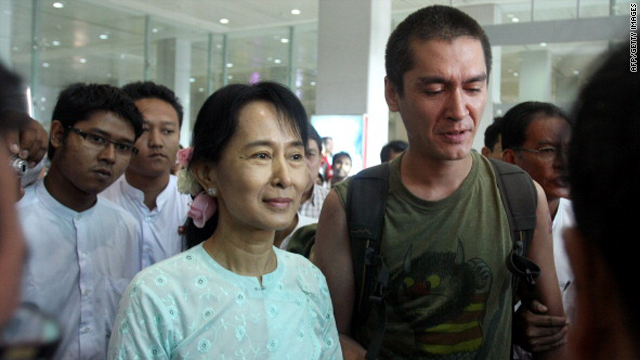 Aung San Suu Kyi holds the hand of her younger son Kim Aris after his arrival at Yangon airport on November 23, 2010.
STORY HIGHLIGHTS

Yangon, Myanmar (CNN) -- The younger son of political activist Aung San Suu Kyi arrived in Myanmar on Tuesday for a long-awaited visit with his mother, from whom he'd been separated for a decade.

Kim Aris arrived about 7:30 a.m. Tuesday at the international airport in Yangon, the former national capital, which also is known as Rangoon.

About 100 of her supporters were on hand for Aris's arrival from Bangkok, Thailand, where he had waited for weeks in limbo for a Myanmar visa. Mother and son left the airport together, bound for her home.

It was not immediately clear how long Aris planned to stay in Myanmar. Aris last saw his Nobel Peace Laureate mother in 2000, when he spent about two weeks with her, according to one of her attorneys.

Myanmar's military regime freed her days after holding the country's first elections in two decades, which critics worldwide dismissed as a sham. The junta's party declared a landslide victory.

Suu Kyi and her National League for Democracy party boycotted the November 7 elections, faulting the military junta. The regime had enacted a new law that forced the NLD to choose between honoring Suu Kyi as its leader and risking the party being declared illegal, or ejecting Suu Kyi from the party and contesting the elections.

The NLD won a landslide election victory in 1990, but the military junta rejected the results. This year, the generals refused to allow international monitors to oversee its elections and overhauled Myanmar's constitution in a way critics say is aimed at tightening the regime's grip.

The constitution now requires more than 100 military nominees in parliament. Myanmar, also known as Burma, has been under military rule since 1962.

The daughter of Gen. Aung San, a hero of Burmese independence, Suu Kyi has repeatedly challenged Myanmar's regime over the years. For her efforts, she won the Nobel Peace Prize in 1991.