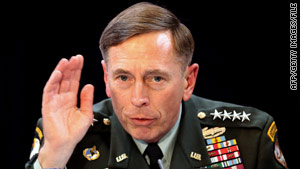 Gen. David Petraeus has been "reassured" by Hamid Karzai that there's no rift with the U.S., a coalition official says.
STORY HIGHLIGHTS
RELATED TOPICS

(CNN) -- In what may be one of the most significant breaches between Afghan President Hamid Karzai and the Obama administration, Gen. David Petraeus personally warned Afghan officials over the weekend the U.S.-Afghan partnership could be "untenable" if Karzai wants U.S. troops out of Afghanistan prematurely.

A senior coalition military official confirmed details of what Petraeus said, but asked not to be identified so he could speak more candidly.

Petraeus made the statements Sunday in a meeting with Ashraf Ghani, the Afghan official in charge of planning the efforts to handle transition from coalition to Afghan control. A planned Sunday meeting with Karzai was rescheduled, but officials insisted it was not canceled due to the tensions.

Petraeus was reacting to a Karzai interview published Sunday in The Washington Post, in which the Afghan leader spoke extensively about reducing U.S. military operations and the number of American forces in Afghanistan.

After reading the article, Petraeus felt the views expressed by Karzai "makes it untenable for us to have a partnership," the official told CNN.

Petraeus has now been "reassured" by Karzai and others that no rift with the United States exists.

But as the top commander, Petraeus clearly was laying down a marker. He "wanted to ensure the Afghan government understood he takes these issues very seriously," the official said. Petraeus "was reassured by President Karzai that he is fully supportive of the joint strategy, that we all share the desire for Afghan forces to take the lead, and that we've worked hard together to address all the issues over which President Karzai raised concerns and will continue to do so."

The timing of the dust-up is not unexpected. At the end of this week, Petraeus will brief a NATO summit in Lisbon, Portugal, on his plans for turning security control over to Afghans by 2014, a goal agreed upon long ago.

But Karzai is under increasing pressure from inside his own government to more quickly demonstrate independence from the United States and distance himself from controversial military night raids and the increasing number of air and ground attacks conducted by coalition forces.

For his part, Petraeus has made clear he plans to continue the stepped-up attacks, which he feels are paying off in reducing the strength and capability of the Taliban. The coalition calculates there has been a sixfold increase in activities by special operations forces in the last 18 months, mostly directed against insurgents.

"We believe that the use of intelligence-driven precision operations against high-value insurgents and their networks is a key component of our comprehensive civil-military operations," Clinton said Monday during a press availability with Lithuanian Foreign Minister Audronius Azubalis.

"These operations are conducted in full partnership with the government of Afghanistan," Clinton said. "They include Afghan forces on each operation. There is no question they are having a significant impact on the insurgent leadership and the networks they operate."