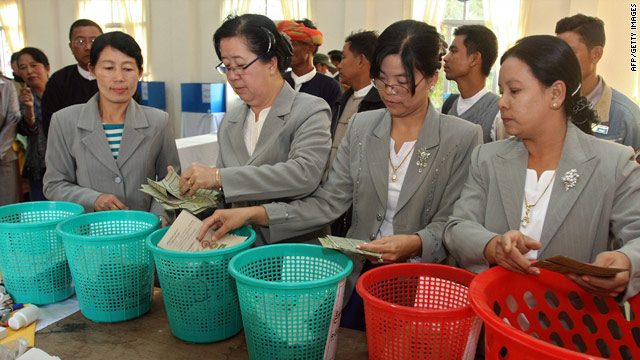 (CNN) -- Word started leaking out Tuesday about the results of Myanmar's controversial weekend elections, though the country's military regime had yet to announce any numbers.

"I believe that the [military-backed Union Solidarity and Development Party] could win between 80 to 90 percent of the whole parliament. And each smaller party would get few seats in order to make the parliament look like a true multiparty parliament," said an independent candidate who competed in the Yangon area. Yangon is the former national capital and is also known as Rangoon.

"This is a useless election," said the candidate, who spoke on condition of anonymity, because he feared for his safety.

"At first, we wanted to try running on this election, as we think that it could be an alternative way for democratic process for Myanmar," the disillusioned candidate said.

Sunday's elections -- the country's first in two decades -- drew fire from critics, who said the voting was aimed at creating a facade of democracy. The outcome is all but certain to favor the junta, critics say.

The military junta also recently overhauled Myanmar's constitution in a way that critics say was aimed at tightening the regime's grip. The constitution now requires more than 100 military nominees in parliament.

The elections, he said, "were neither free nor fair, and failed to meet any of the internationally accepted standards associated with legitimate elections. The elections were based on a fundamentally flawed process and demonstrated the regime's continued preference for repression and restriction over inclusion and transparency."

"Since NLD is not participating in this coming election, she doesn't want to vote," her lawyer Nyan Win said in October.

The National League for Democracy, Suu Kyi's party, announced in March that it would not participate. A new law forced the NLD to choose between honoring Suu Kyi as its leader and risking the party being declared illegal, or ejecting Suu Kyi from the party and contesting the elections.

Suu Kyi's party won a landslide election victory in 1990, but the military junta rejected the results.

The regime recently passed a law that made Suu Kyi ineligible to run because of a court conviction. The Nobel laureate has called the law unjust.

Suu Kyi won the Nobel Peace Prize in 1991. She has spent most of the past 20 years under house arrest.

Her supporters have said that her current conviction was a way to remove her from the election campaign.

A Myanmar court convicted Suu Kyi in August 2009 for breaching the terms of her house arrest after American John Yettaw swam uninvited to her lakeside house in Yangon and briefly stayed there. In February, a court rejected her appeal for release.

Suu Kyi's current house arrest is due to end in mid-November, but her lawyers are skeptical that the military junta will actually release her.

Before the voting, U.N. Secretary-General Ban Ki-moon said that the junta had to release Suu Kyi and all other political prisoners to show that the elections were credible.