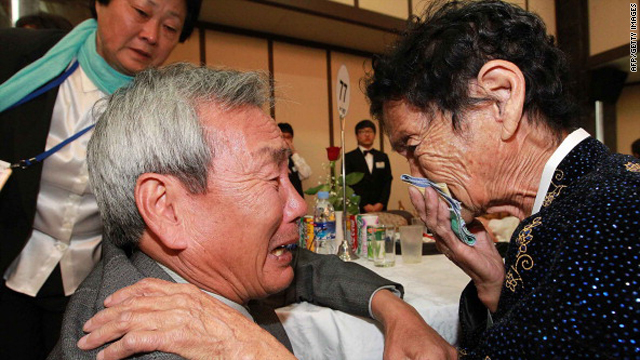 Seoul, South Korea (CNN) -- Relatives divided since 1953 reunited for the first time Saturday at a South Korean-built tourism resort in North Korea amid tensions between the two sides.

Elderly men in suits and women in traditional Korean silk hanbok dresses sat at numbered tables in a large restaurant,

Many burst into tears; some sat, spoke and exchanged photographs; others simply looked bewildered as they clutched hands and stared into faces unseen for six decades. The relatives have been separated from since the 1950-53 Korean War.

In Seoul, the scenes at a tourism resort at Mount Kumgang played on TV at a press room.

"We have held a memorial service for you every year," South Korean Yi Jong-sool told his North Korean elder brother, Yi Jong-ryeol, 90. "I can't believe you are alive."

Goh Yoon-sob, 81, from North Korea met his son Koh Bae-il, 63, from the South; the two were separated when the son was three years old. The men clutched hands and exchanged photographs. The son appeared speechless as his father spoke to him.

"Our mother was waiting for you, but she died last year," South Korean Yi Yun told his older brother Yi Hwa-chun, 81. "If only she had lived one more year ..."

Kang Kyung-won, 79, from North Korea sat across from his younger sister Kang Byong-sun from the South. She dabbed her eyes with a handkerchief unable to speak.

There were some remarkable stories.

Four South Korean soldiers, initially believed killed in action in North Korea, were alive. They met their family members from the South.

Some 436 South Koreans, ranging in age from 12 to 96, met 97 family members from North Korea. But some planned reunions did not go ahead; some relatives had died in the past few days, while others were too ill or fragile to attend.

The meetings, which stretch over three days, will be bittersweet; the chances of any of the divided family members meeting again are slim.

The tragedy of the divided families dates to the 1950-1953 Korean War, when the Cold War's division of the peninsula into two nations became permanent.

Amid fighting, millions of Koreans became refugees -- either fleeing the violence or fearing political reprisals from one side or the other. In winter of 1950, an estimated 650,000 refugees fled North Korea when United Nations forces retreated in the face of a surprise Chinese offensive.

There is no direct telephone or mail contact between the two Koreas, but some families in the South have managed to broker surreptitious voice and written contact with their relatives in the North in recent years, as North Korea's border with China has become more permeable and illegal cell phones have penetrated the insulated state.

Some 80,000 South Koreans have registered with their government to join one of the infrequent reunions, but 40,000 people are believed to have passed away or given up hope, according to the South's Ministry of Unification. Numbers north of the Korean demilitarized zone are unknown.

The first family reunions took place following a landmark summit between the two Koreas in 2000. Since then, 17,100 people representing 3,500 families have been reunited on 17 separate occasions.

The event comes amid tense inter-Korean relations. The North continues to deny any involvement in the sinking of a South Korean warship in March that killed 26 sailors. Seoul, citing an international investigation, accuses Pyongyang of a torpedo attack.

On Friday, the day before the reunions were due to begin, North Korean troops fired two bullets at a South Korean guard post. Southern soldiers returned three rounds, and are demanding an explanation via the United Nations' Military Armistice Commission. But the incident has not affected the reunions.