In Karachi, the death toll mounts 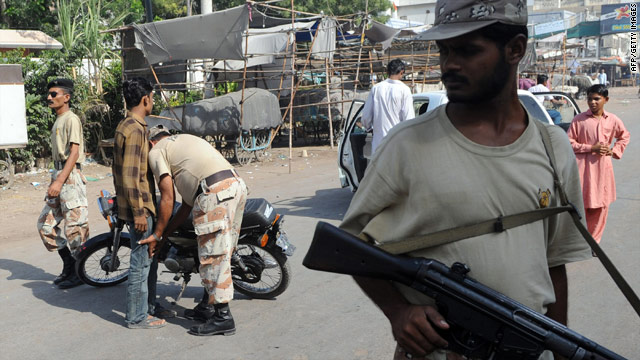 Islamabad, Pakistan (CNN) -- More than 70 people have died in the five-day-old wave of violence in the Pakistani city of Karachi, police said Wednesday.

Rafiq Gul, a senior Karachi police official, said 72 people have died and 80 others have been wounded since Saturday. Police are linking the killings to unrest over the assassination of a prominent politician in August.

One person was found shot dead on Wednesday and across the city on Tuesday, 28 people died and 20 others were wounded in several attacks, Gul said.

Pakistani Prime Minister Syed Yusuf Raza Gilani issued a statement saying "those playing with innocent lives are surely the enemies of the people of Pakistan and the state so it is the duty of all to stand against such elements."

Gilani urged people to "sit together to resolve the issue and prepare a joint strategy to defeat the militant elements who are destroying the peace of Karachi."

The killings began Saturday ahead of a provincial by-election to replace Raza Haider, the assassinated lawmaker from the Muttahida Qaumi Movement, a liberal political party whose stronghold is Karachi.

The MQM, one of the largest parties in Pakistan, is part of President Asif Ali Zardari's ruling coalition.

The Awami National Party, a political rival to MQM, boycotted the vote -- which the MQM won by a vast majority -- after demands to use election monitors were rejected.

The MQM mainly represents Urdu-speaking people, who migrated to Pakistan from India during partition in 1947, while the Awami National Party represents Pashto speakers -- more of whom are moving to Karachi from northwest Pakistan

MQM is wary of the potential strengthening of a second political or ethnic group in its stronghold of Karachi, and the two parties have been engaged in bloody battles for years.