21 killed in China coal mine blast 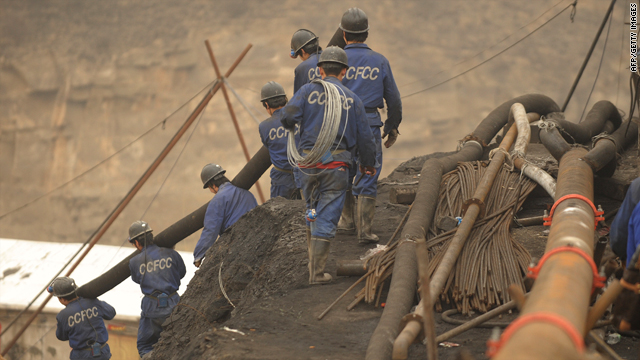 Mine workers carry pipes to the entrance to the Wangjialing coal mine during rescue efforts on March 31.
STORY HIGHLIGHTS

Beijing, China (CNN) -- A gas explosion Saturday killed at least 21 workers and 16 others were trapped at a coal mine in central China, authorities told state-run media.

Rescuers have retrieved 20 bodies so far, the official Xinhua news agency reported. The 16 trapped miners have been located but rescuers have to clear coal dust from the shaft in order to reach them.

China's State Administration of Work Safety said about 276 workers were underground in the mine in Henan province when the blast occurred. Of those, 239 escaped.

The same mine reported another explosion in August 2008, that killed 23 miners.

China has one of the world's deadliest records for miners, with poor safety standards accounting for thousands of deaths each year.

The effort was part of a larger plan by the National Energy Administration to restructure the mining industry to prevent deadly accidents and reduce greenhouse gas emissions, the news agency said.