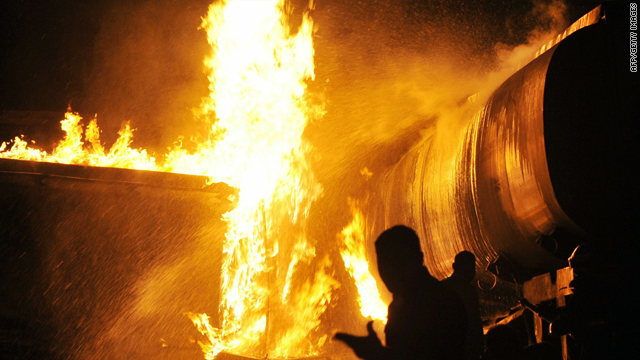 The attack came shortly after Pakistan's ambassador to the United States vowed his country would go after terrorists on its soil.

Naeem Iqbal, a police spokesman, said five people were wounded in the attack on tankers parked on a main road outside a housing complex near the capital city of Islamabad. Efforts to put out the blaze are ongoing, he said.

Bin Yamin, a deputy police chief, said eight gunmen entered the area on Monday around 12:15 a.m. local time. He said they told people near the trucks to run away and that most did. Then they opened fire.

The tankers were parked in the vicinity of an oil refinery where they were going to go to pick up fuel for NATO forces in Afghanistan, Yamin said.

Video images of the scene showed firefighters working to put out flames that stood out in the night against the overturned trucks.

On Sunday, Pakistan's ambassador to the United States insisted his country would go after terrorists on its soil and needed only "technical" help from Washington, not U.S. troops on the ground.

Husain Haqqani, told CNN's "State of the Union" that Pakistan would reopen a NATO supply route into Afghanistan "relatively quickly," probably in less than a week.

Haqqani said the United States and Pakistan were investigating the killings together.

He said Pakistan will move against militants on its own schedule, not Washington's.

"Pakistan is saying we will take care of all terrorists on the Pakistani side of the border, but we will do it on our timeline," Haqqani said Sunday. "We cannot always follow a timeline that our allies set for us, because we are allies, not a satellite."

Pakistan has lodged protests against NATO helicopter incursions into its territory -- which the International Security Assistance Force says its rules of engagement permit -- and is very sensitive about reported U.S. drone strikes in Pakistan.

There were a record number of drone strikes last month, according to a CNN count.

Security analysts have described North Waziristan as a haven for various factions of Afghan and Pakistani Taliban and al Qaeda militants.

The majority of reported strikes this year have hit targets in the district, a mountainous tribal area on Pakistan's border with Afghanistan, analysts said.

The United States does not officially acknowledge that it has unmanned aircraft firing missiles at suspected militants in Pakistan, but it is the only country operating in the area that is known to have the ability to do so.

He said Pakistan's geography makes it hard to hit militants.

"Sometimes people in the U.S. think ... that it's all flat land with everything visible. Not even the drones can identify everyone in North Waziristan because of the complexity of terrain," Haqqani said.

"All politics is local and the local situation in Pakistan is that the United States is not very popular amongst our public," he said.

"The fact remains that an elected democratic government in Pakistan is limited by public opinion to the extent of what it can do," he said.