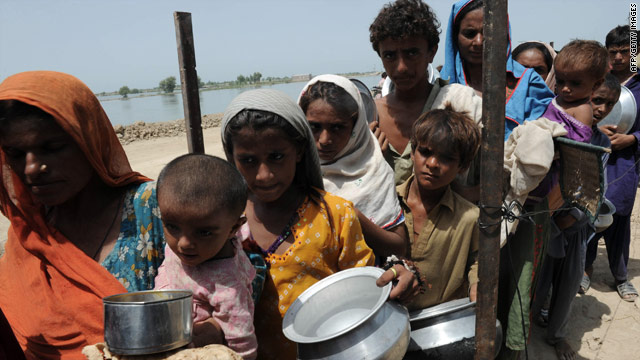 Pakistanis queue for army-provided food near a makeshift camp in the Kali Mori area of Khairpur Nathan Shah on Tuesday.
STORY HIGHLIGHTS

Islamabad, Pakistan (CNN) -- The United Nations has established more than a thousand health clinics across Pakistan in the wake of widespread flooding, a U.N. official said.

"Almost 1,200 mobile health clinics are operating across Pakistan," said Maurizio Giuliano with the Office for the Coordination of Humanitarian Affairs. "For many people, this is the only way to receive health care."

Water-borne illnesses from contaminated flood waters have erupted nationwide. At least 1 million Pakistanis have crippling diarrhea or respiratory infections. About 65,000 cases of malaria have been reported.

"These clinics reach even the remotest areas with teams sometimes walking for six hours and carrying 20 kilograms [44 pounds] of medical supplies on their backs."

The death toll in the country has climbed to 1,738, the Pakistan Disaster Authority said over the weekend. Officials said last week that 17 million have been affected nationwide. The death toll is expected to rise significantly as flood waters continue to recede and more bodies surface.