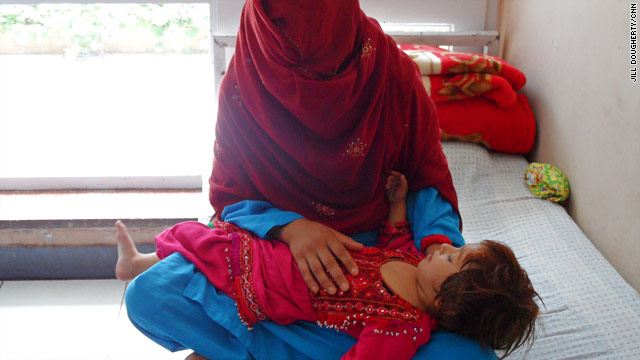 A mother and child at a drug treatment center in the back street of Kabul where many go to fight addictions to heroin and opium.
STORY HIGHLIGHTS

Kabul, Afghanistan (CNN) -- The 18 women sit cross-legged on metal beds, wearing long, loose dresses and nightgowns, their heads completely covered with shawls. They do not want us to see them. Some of them are holding babies in their laps.

We are in a treatment center hidden away in a back street of Kabul. It is administered by the Afghan government and funded by the U.S. State Department, through the Bureau for International Narcotics and Law Enforcement Affairs. The U.S. is the primary and largest donor for drug treatment programs in Afghanistan.

The physician in charge, Dr. Latifa Hamidi, tells me that most of these women got hooked because their husbands smoked heroin. Injecting heroin is not as common here in Afghanistan as it is in the West.

The children, the staff tells us, became addicted when their mothers blew heroin smoke at them to calm them down when they cried. "Because all their family members are addicted, their child also gets addicted," the doctor says. "When their child is in pain the family doesn't give them medicine, they use the narcotics."

When their child is in pain the family doesn't give them medicine, they use the narcotics.
--Dr. Latifa Hamidi
RELATED TOPICS

Children as young as two are hooked. It's the youngest drug-addicted group ever identified worldwide, according to the U.S. State Department. There are no established protocols for treating children this young.

I talk with 22-year-old Zainab. She nervously shifts her scarf so I can barely see her eyes. She tells me she got hooked when she and her husband were refugees in Iran. "My husband got me addicted," she says, "When I was feeling pain or had a cough I would smoke."

It's a story counselors are hearing more and more. The U.S. State Department calls the prevalence of drug use in Afghanistan "alarming." It quotes tribal chiefs who, in some cases, report that half the population of their villages consumes opiates.

Heroin and opium are cheap and readily available in Afghanistan, a country that produces 94 percent of the world's opiates. The United Nations estimates there are close to a million drug addicts in the country, more than seven percent of the population. Yet there are only 40 residential drug treatment centers in the entire country, helping a little more than 10,000 users per year.

The women in this center go through a 45-day program which the physicians are considering increasing to 90 days. It's voluntary; counselors and social workers go into the community, promoting an awareness campaign about the dangers of narcotics.

They encourage women who are addicted to enter the treatment program. Some must go through detox; the doctors say they do not use Methadone, only drugs that might be needed to help someone suffering from the pains of physical withdrawal such as vomiting.

Detox lasts for 10 days and then the patient moves on to Rehab. Children who are addicted are treated in an adjoining child care center.

Prior to U.S.-funded treatment centers, the relapse rate was close to 100 percent, the State Department says. The doctors say the rate at this center is relatively low. The goal of U.S.-funded programs is to cut relapse rates in half over the next two years so that 50 percent of all clients will be drug-free.

Zainab peeks out through a slit in her scarf. She tells me she is feeling better, that the doctors are helping her. I ask her what she is hoping for, what will happen to her when she finishes treatment and goes home?

"I won't go back to smoking heroin," she tells me. "I want to start a new and better life."