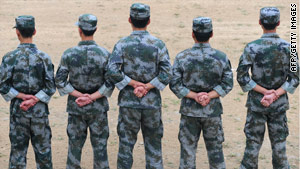 Washington (CNN) -- The Chinese military continues to expand its reach and capabilities beyond its immediate geographical area, a new report from the U.S. Department of Defense concludes.

The report, an annual assessment sent to Congress, notes that some of those capabilities have been positive, like humanitarian and anti-piracy efforts, but others are meant to give China "extended-range power projection."

As in the past, the U.S. program to sell military equipment to Taiwan continues to create tension with China and has led to cessation at times of military relations between the two countries.

The assessment notes that China has the most active ballistic and cruise missile program in the world, including developing anti-missile technology. Also of concern are Chinese efforts to develop a long-range anti-ship ballistic missile with a reach of more than 900 miles, which would include areas in which the U.S. Navy is active. Such a measure would give the Chinese military "the capability to attack ships, including aircraft carriers, in the Western Pacific Ocean," according to the report.

The Chinese could start building their first aircraft carrier this year, and China has started to train pilots to operate off such carriers. It already has a Russian carrier that it is refurbishing.

Its naval muscle is also being flexed with additional nuclear powered submarines, and it has nearly completed a navy base on Hainan Island, "with direct access to vital international sea lanes," which will allow for "stealthy deployment of submarines," the report says.