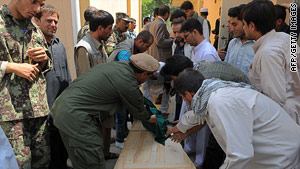 Friends and family attend to the coffin of a slain Afghan aid worker this week at a Kabul, Afghanistan, morgue.
STORY HIGHLIGHTS

Check out the Afghanistan: Crossroads blog for more on what's happening in the war-torn country.

Kabul, Afghanistan (CNN) -- The deaths of 10 medical aid workers in northeastern Afghanistan last week appear to be the work of insurgents from outside that remote corner of the country, an international humanitarian aid organization said Thursday.

"Our own research suggests that the murders were not a robbery as initially reported in the press," said a statement from the International Assistance Mission. "We are now working on the assumption that the attack was an opportunistic ambush by a group of nonlocal fighters."

Gunmen shot and killed the 10 members of the medical team a week ago in Badakhshan, a remote northeastern region.

Among the dead were six Americans, two Afghans, a Briton and a German, Dirk Frans, director of International Assistance Mission, said this week. A man named Safiullah was the lone survivor and has been interviewed by the aid group.

The Taliban has claimed responsibility for the attack.

International Assistance Mission's website said an eye-care team had been in Nuristan province "at the invitation of communities there. After having completed their medical work, the team was returning to Kabul."

"A group of guides from the community that invited the team accompanied them from the village where the road ended to Parun in Nuristan. As per local etiquette the guides also accompanied the team back," the group said in a detailed account of the incident based on information provided by Safiullah.

"Shortly after the team boarded their vehicles, they were ambushed. They had just managed to drive their three vehicles across a river swollen by the heavy rains in the area. After making it safely to the other side of the river, they got out of their vehicles obviously relieved at the successful crossing and end of the difficult part of their trip. It was then that a group of armed men attacked the team, killing all but one of its members on the spot," the account said.

Hans Ronnlund, assistant to the executive director of the mission group, denied statements by the Taliban that the medical staff was carrying Bibles. Ronnlund said the International Assistance Mission is a humanitarian development organization formed by various Christian groups, but said medical staffers do not carry Bibles.

"We cannot understand how they can say that," he said.

Libby Little was similarly insistent that the International Assistance Mission was not a missionary group. She said that it is a Christian group but that it focuses on providing services such as teaching English or providing medical care. She noted the Afghan government invited the group and points out its workers received visas allowing them entrance to the country.