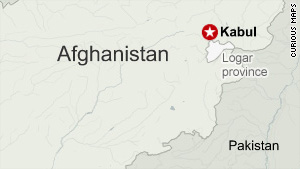 Kabul, Afghanistan (CNN) -- Military officials Tuesday identified two sailors involved in a firefight in eastern Afghanistan last week that left one of them dead and the other in the hands of the Taliban.

Newlove and McNeley were travelling in Logar province when they were attacked, the military said.

Taliban spokesman Zabiullah Mujahid said Monday that one American died in a firefight and the other is being held by the group. Mujahid said the two Americans were driving in a civilian vehicle in the village of Dasht, in Charkh district.

The Taliban wanted to take both men alive, but the firefight broke out, killing one of the Americans, Mujahid said. The other is alive and being held in a safe location, he said.

Newlove's family released a statement through the Navy asking that the media release no details of the incident or information about the family.

"The information in the wrong hands could certainly jeopardize Jerod's safety and well being," Navy spokesman Sean Hughes said. "The Newlove family and Navy appreciate as much privacy as possible during this difficult time which we all sincerely hope has a positive outcome."

Provincial government officials confirmed McNeley's death on Sunday. Den Mohammad Darwish, the spokesman for the governor of Logar province, said he learned from locals that the American was killed. He said the body was found in the Patanak Mountains of Charkh district. He also said the vehicle the men were driving was located Sunday.

There were no immediate demands from the Taliban for the return of the Americans because the group was still deliberating what its demands would be, Mujahid said.

A U.S. military official confirmed that a $20,000 reward was being offered for information leading to the return of the two sailors. Posters were being distributed in the region.