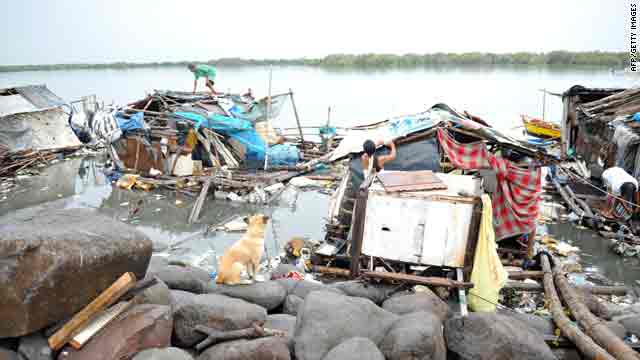 Residents repair their damaged shantyhouses along the coastal road in Paranaque, outside Manila, Philippines, on Wednesday.
STORY HIGHLIGHTS
RELATED TOPICS

(CNN) -- Tropical Storm Conson weakened further Wednesday, as it rolled westward over the Philippines, stranding more than 1,300 people across the archipelago.

The Philippine National Disaster Coordinating Council issued warnings about flash floods, landslides and big waves. But the storm's winds dropped to 93 kph with gusts up to 120 kph, down from top sustained winds of 111 kph when Conson made landfall on the northern Philippine island of Luzon, about 66 kilometers east of the capital, Manila, late Tuesday evening.

Conson is moving to the west at 8 mph (13 kph), as it moves away from the Philippines and into the South China Sea. Manila received just over 3 inches (7.6 cm) of rain; the heaviest rain totals are from Daet where 6.5 inches (16.5 cm) have fallen.

The National Disaster Coordinating Council of the Philippines said it knew of 19 missing fishermen, but the weather and choppy seas precluded officials from mounting search and rescue operations. Emergency responders were on alert, the council said.

The storm, known locally as "Basyang," became the first typhoon of 2010 on Monday before losing some steam.

But Conson's rains are potent enough still to cause flooding. The eastern Philippine island of Samar already has received about 4 inches (10.2 cm) of rain, according to Brandon Miller, CNN International's senior meteorologist. The National Disaster Coordinating Council said portions of Quezon City and Manila had flooded, with water ranging from "gutter deep" to 8 inches deep.

There were also power outages reported in Albay, the state-run Philippines News Agency said. However, all major roads and bridges were passable as of late Tuesday, the National Disaster Coordinating Council said.