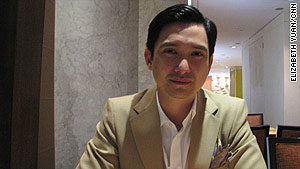 Miguel Syjuco wanted to write a book that bookstores wouldn't know where to place: fiction or nonfiction?

Hong Kong, China (CNN) -- Two years before it was even published, Miguel Syjuco's debut "Ilustrado" won the Palanca Grand Prize for the novel -- the Philippines' top literary prize, given only every three years -- and the Man Asian Literary Prize, Asia's top honor.

Finally released, the book begins in 2002 with the death of Crispin Salvador, the "Panther of Philippine Letters" whose works spanned three decades until his 2,572-page memoir, "Autoplagiarist," was published in 1994.

For the preceding two decades Salvador had labored on a controversial book, "The Bridges Ablaze" (or, "TBA"), meant to shed light on the corruption of the Philippine ruling elite. The unfinished book was to mark his return to the literary scene, but he was found dead in New York City's Hudson River under mysterious circumstances.

It was left to a Miguel Syjuco, who was in the midst of writing his mentor's biography, "Crispin Salvador: Eight Lives Lived," to find the missing manuscript and find out whether he was killed or committed suicide.

The book, which sees Miguel return to the Philippines for answers, blurs the line between fiction and nonfiction, forcing the reader to question, is this real? Is this not real? Who is this Salvador fellow, whose works are referenced throughout "Ilustrado" with detailed footnotes? How closely does Miguel resemble the author of "Ilustrado"?

The reader learns of Salvador through post-mortem analyses in media, excerpts from Salvador's works and interviews, Miguel's observations and biography-in-progress, blogs and message boards among other resources.

Although the term of the Philippine president in the novel -- Fernando V. Estregan -- coincides with that of Gloria Macapagal-Arroyo, Estregan is in fact an amalgamation of Ferdinand Marcos, Fidel Valdez Ramos and Joseph Estrada, Syjuco explained.

Video: Philippines politics
I wanted him to write the books I wish I had written
--"Ilustrado" author Miguel Syjuco, referring to Crispin Salvador

Estregan is "all of those and none of them," Syjuco said in an interview in Hong Kong last month. The wealthy and powerful Lupases and Changcos in the novel may conjure the Philippines' own Lopezes and Cojuangcos --- the family of former President Corazon Aquino -- but Syjuco said the names in the novel are not based on the real families at all.

"The idea that people are wondering if this is real, or if this is not, is an interesting dynamic for any reader, and I wanted to challenge the reader that way," Syjuco said. "And that's also why I chose to name the protagonist Miguel Syjuco. That character is not me. But the reader is also wondering, and it's not such a bad thing to keep the reader off-balance."

That a person is defined, his or her existence affirmed, by a mere presence on the Internet raises interesting questions. Such is the case with the minor character Vita Nova, whose fan Web site for the author Syjuco resides at www.miguelsyjuco.com. But is she real?

Syjuco said he wanted his book to be as much a mirror of Philippine society as a cautionary tale for himself. Salvador is an embittered, lonely hero in exile and whose last work was to be an angry "list of our past sins."

"And that may not necessarily be what's needed," Syjuco said, adding that he wanted a book that is "hopeful and funny and compassionate" while at the same time reflective of contradictions and the absurd in Philippine society and the world.

The book's title, which means "enlightened" in Spanish, refers to young men who left then-Spanish colonized Philippines in the late 1800s for Europe to study and then returned with radical ideas that fomented revolution. Syjuco said he wanted to update the term to refer to the millions of Filipinos abroad who have the potential to give back to their country.

Syjuco also wanted the term to refer ironically to the elite in power who fail to bring the basic human rights that Filipinos would expect: peace, justice, opportunities to work -- even hope.

In "Ilustrado," Miguel is an aspiring writer who, like the real Syjuco, spent time in New York and was a writing student at Columbia University. The novel also depicts him as checking his fly when a pretty woman is around, worrying about eye crusties and experimenting with drugs.

Did Syjuco the novelist worry if readers might get the wrong idea about him? "I've been young, I experimented with drugs, I've made my mistakes, I've been lost. Who hasn't? And I'm hoping that that sort of honesty will appeal to a reader." Still, he added, if readers see him in Miguel, it's only a "small side."

"More than anything, I'm hoping they'll see themselves."

Syjuco said he had wanted to write a book that bookstores wouldn't know where to place -- in the fiction or nonfiction section. Alas, his book's title would ultimately be: "Ilustrado: a novel."

Syjuco's eureka moment for the novel came while fact-checking for "The Paris Review." "I spent hours in the stacks looking up things for, say, [Jack] Kerouac." An artist's life is told through their body of work and what's written about it, he said.

"I thought, 'This is an interesting way to build a portrait of an artist.'"

Syjuco also wanted to explore -- through fragments of narratives -- how modern society cobbles together its perception of reality through all kinds of means: multiple news outlets, Twitter, e-mails and text messages, blogs, message boards, jokes and rumors.

Thus began the meticulous conception of Salvador's life and entire bibliography, one so detailed that were it not for the presence of Google today, "Ilustrado" would leave many readers convinced of his existence.

"I wanted him to write the books I wish I had written," Syjuco explained. "In the Philippines, we don't have pulp fiction, like [Crispin Salvador's] 'Manila Noir'...We don't have seafaring novels. We don't have crime writing. We don't have a lot of the stuff Crispin actually ostensibly wrote. I wanted to put those out there -- finally, a writer who did that. Hopefully, that would give Filipino writers the idea, 'Hey, why don't I be that writer?"

Some of the short stories and characters Syjuco wrote in years of creative writing classes wound up in "Ilustrado," a work that took him four years to write.

(Salvador had his own "Ilustrado," making his mark with a 1965 novel called "The Enlightened," a historical fiction work set between the Philippine Revolution and the Philippine-American War at the turn of the 20th century.)

Syjuco said he had fought against his father's desire for him to enter politics. Augusto Syjuco Jr. is a former Cabinet official running in the May 10 elections to win back the Congressional seat in Iloilo province where he had served for two terms. Syjuco's mother, Judy, holds that Congressional seat now.

Although "Ilustrado," the leading publisher of which is Farrar, Straus and Giroux, is coming out in more than a dozen languages and nearly 20 countries, the dream of a deal in the main language of Tagalog remains elusive. "We're not a reading nation. We're very poor, so we can't afford books," Syjuco said. In 2006, nearly 28 million people -- or a third of the population -- lived in poverty, according to the government.

Now a Montreal, Canada, resident, the 33-year-old Syjuco said that while losing touch with his roots remains a concern, the distance has allowed him to see the Philippines with fresh eyes and to "write fairly and honestly" about home.

Most of the world perceives the Philippines as Imelda Marcos, dancers, prostitutes and maids, he said.

"We're all of those things and proudly. But we're so much more."