Would Chinese consumers 'go green' -- if given the choice? 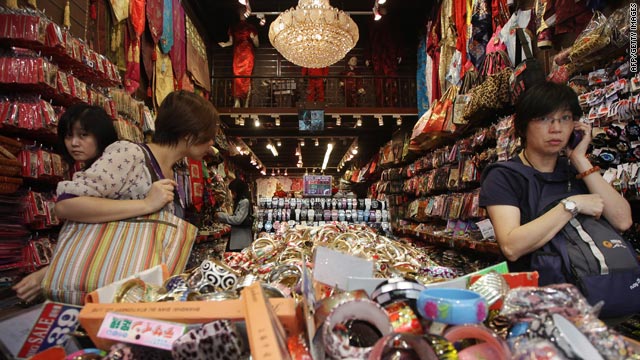 Qingdao, China (CNN) -- In Qingdao city on the eastern coast of China, Tsingtao beer is the pride of the people.

The brewery is the central attraction. More than 3,000 wide-eyed tourists visit every day, filing off buses to marvel at the production site of their favorite beer.

What many do not know is that the Tsingtao Brewery Group was recently accused of violating environmental standards. It is just one of 20 companies named on a "polluters' blacklist," including major companies such as Hitachi, Philips and China's most popular instant noodle maker, Master Kong.

The Green Choice Consumer Action list is backed by 34 different NGOs, including the Institute of Public and Environmental Affairs, Green Earth Volunteers, Friends of Nature and Wild China. They allege the companies either polluted or failed to disclose their emissions.

"This campaign is just beginning to let the public know that many brand name products damage the environment," says Wang Yongchen, chairwoman of Green Earth Volunteers. "We shouldn't be living a polluted life because of uninformed choices. Our goal, our hope is to take them off the market."

"Tsingtao has been so irresponsible," Wang continues. "Their wastewater discharge never met standards. And we've dealt with it a couple of times, discussing the problem and it's never been resolved."

The Green Choice Consumer Action list was published online, where China's massive Internet population is buzzing about it.

"We shouldn't buy products from these companies," one blogger writes. "We should choose other green brands. That way we actually contribute to pollution control in China."

Another types, "This is a misleading list for common Chinese people. Green brands are expensive. Big brands are reliable."

The question remains whether common Chinese people, with historically low but rising incomes, will go green if given a choice.

"I think in China issues of the environment are strong and topical at the moment," says consumer analyst Ray Ally of Landor Associates.

Ally adds, "In China, it's quite fashionable to be green."

If they are willing to pay for it, it could mean a 1.3 billion-strong silent majority influencing companies to clean up their act.

CNN contacted several companies on the list for a response. Philips, Hitachi and Master Kong all denied requests to be interviewed and did not provide statements. Some companies such as Motorola did respond to the study. The electronics company stated in an e-mail to CNN,

In China, it's quite fashionable to be green.
--Consumer analyst Ray Ally

"In our facilities and operations, Motorola aims to minimize environmental impact ... To achieve this, we meet or exceed all applicable environmental, health and safety, legal and other requirements to which we subscribe in the countries where we do business."

Motorola also stated it was removed from the 2008 edition of this list after it was proven they were meeting standards, and does not understand why the 2010 edition was not updated to reflect their standing.

Tsingtao Brewery Corporation invited us to tour their factory with their top environmental director.

"While profits are important," says Caihong Wang, "Tsingtao also makes every effort to reduce the negative effect to the environment."

The company says it has invested $18 million over the last three years to improve environmental practices. But critics charge the company's wastewater disposal protocol is not good enough. Company officials acknowledge their Qingdao-based factory produces about 1,000 tons of beer on an average day, and about 3,600 tons of wastewater. The wastewater is biologically treated on-site in giant pools where it's combined with aerobic microorganisms.

Tsingtao says about 15 percent of the water is recycled on factory property; the rest is sent into the Qingdao city water sanitation system. Wang points out that the company has reduced water consumption by 28 percent over the last few years, and says, "Environmental management is long-term continuing work and it has a very important place in our company's strategy."

The Qingdao city government said that Tsingtao Beer cooperates by allowing its pollution water levels to be monitored by the city government system. Government officials declined to comment on whether or not Tsingtao has ever actually been in violation of water pollution standards.

Loyal customers who fill Qingdao's restaurants and bars every evening stand by their favorite beer.

"I've heard about this from the media," says beer drinker Mr. Li, referring to news of Tsingtao's alleged environmental negligence. "I believe the people of Tsingtao can deal with this."

He raises his glass for a toast to a possibly hung over, but potentially greener tomorrow.