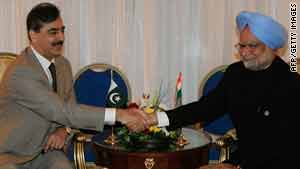 Islamabad, Pakistan (CNN) -- The prime ministers of bitter rivals India and Pakistan plan to meet this week during a summit of the South Asian Association for Regional Cooperation in Bhutan, the Pakistani premier's office said in a statement.

India says Islamic militants who trained in Pakistan are to blame for the November 26, 2008 terrorist attacks in Mumbai, India that left 160 people dead.

The nuclear rivals also have a long-standing dispute over the mountainous Kashmir region which separates the two countries, with India accusing Pakistan of fueling an insurgency.

The countries have fought three wars over the territory since their independence in 1947 and routinely exchanged fire along the border, known as the Line of Control, until a 2003 cease-fire agreement was struck.

They plan to talk about food security, alleviating poverty, energy and water conservation and rural and agricultural development, among other things.