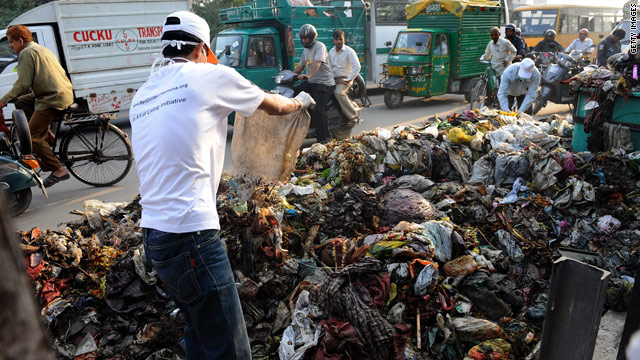 Commuters look on as volunteers from clean steps leading down to the polluted Yamuna river during a cleansing drive in New Delhi on March 18, 2010.
STORY HIGHLIGHTS

Pedaling around the city of more than five million vehicles weaving through whatever space they find is not without danger either.

As New Delhi grapples with the woes of rapid urbanization of largely rural India, some enterprising citizens are turning to an unexplored territory to find solutions.

Architect Manit Rastogi scurries through thick pockets of bushes along filth-filled, age-old drains that he is convinced can be transformed into scenic lakes with walkways and cycle tracks alongside.

He believes technological interventions can do wonders with the 350-kilometer circuit of dirty streams that dump tons of household sewage into the River Yamuna, New Delhi's heavily polluted lifeline.

Rastogi has pitched his drain-cleaning plans to authorities in New Delhi and is now identifying locations for at least three experiments that he proposes to complete by the end of 2010.

"We can treat sewage at its source with the help of mini-equipment before it flows into the nullahs," he said.

Limitedly, enzymes can also be used to attack contaminants in a technique he describes as "bioremediation."

Video: Plan turns dirty drains into bike paths
The main problem that a project like this faces is ... the fact that there is no one person accountable for the city of Delhi
--Architect Manit Rastogi
RELATED TOPICS

Littered with garbage, the stinking network of 17 nullahs are free of human occupation in a city otherwise struggling to deal with the rampant encroachment of public streets.

An expert in urban planning and the head of a private architecture and design firm, Rastogi envisages turning those tracts into landscaped passages for New Delhi's pedestrians, cyclists and solar-powered rickshaws.

"The city will then be interconnected with an eco-friendly and safe transport network," he said.

According to India's Centre for Science and Environment (CSE), one-third of New Delhi's daily commuters walk to work.

"They walk in extremely unsafe and hostile conditions, in constant conflict with motorized traffic and are easy victims to crashes and accidents," CSE said in a report last year.

Pedestrians in New Delhi, it added, accounted for 47 percent of road accident deaths.

"All the ills of urban development exist in this one city," Rastogi said, noting New Delhi's gridlocked roads, rapidly increasing population and high levels of pollution.

Figures posted on the Delhi government Web site show that the city received 233,000 migrants from other states -- apparently in search of work -- in 2006, a number higher than the population growth that took place naturally that year here.

Spread over about 1,500 square kilometers, New Delhi is home to about 17 million people.

The 40-year-old, London-educated architect seems confident that he can ease some of the city's burden.

But what Rastogi is seeking for his proposed answer to New Delhi's problems is cooperation from a complex bureaucracy.