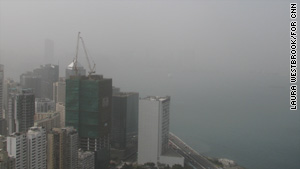 Hong Kong, China (CNN) -- Air pollution at or near record levels in Hong Kong on Monday was caused by a sandstorm from northern China, environmental officials said.

The Environmental Protection Department urged people, especially those with breathing or heart problems, to stay indoors and limit physical exertion.

Hong Kong's air pollution has grown progressively worse during the past two decades, as pollution from mainland China has blended with pollution generated by Hong Kong.

Over the years, poor air quality has even affected the view across Victoria Harbor, which separates Hong Kong Island from the Kowloon Peninsula by less than 1 kilometer (0.6 mile) at the narrowest point.

On days with heavy pollution, the vibrant lights and skyscrapers on either side of the harbor cannot be seen from the other side.