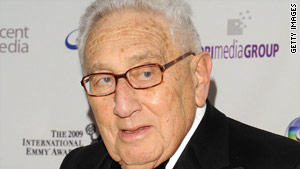 "He is getting hydration and holding his food down," Dr. John Linton of Yonsei Severance Hospital said. "All his signs are normal. We hope to send him on his way tomorrow, but he is an elderly gentleman, so we are watching him like a hawk."

The state-run Yonhap news agency reported that Kissinger, 86, arrived in the South Korean capital Wednesday for a security forum and met with President Lee Myung-bak on Friday.

A special medical team did a check-up and MRI scan and took X-rays, but found nothing serious, staff sources at the hospital said.

Kissinger will likely remain at the hospital overnight and will probably be released Sunday, they said.

Kissinger, who now chairs a consulting firm, served in the 1970s under Presidents Nixon and Ford. He shared the Nobel Peace Prize in 1973 with Le Duc Tho for negotiating a treaty to end the Vietnam War.

Kissinger had triple coronary bypass surgery in 1982 and an angioplasty in New York five years ago.