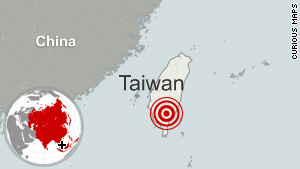 (CNN) -- A 6.4-magnitude earthquake rocked southern Taiwan on Thursday morning, according to the U.S. Geological Survey. There were no immediate reports of deaths or serious injuries.

Were you there? Did you feel it?

The region, which includes Taiwan's Maolin National Scenic Area, is recovering from a direct hit by Typhoon Morakot that killed hundreds in August. The typhoon dumped more than two feet of rain, causing serious mudslides in the south, including one that buried the village of Shiao Lin under 50 feet of mud.

Shuo Hong, an orthopedic surgeon in Taipei, about 155 miles away from the epicenter, felt the earthquake during a meeting at a hospital. "We were debating whether or not to run for shelter," he said, "but the hospital is safe. It is built to resist a 7.0-magnitude earthquake.

"It was shaking for about 20-30 seconds, shaking more than what we expected," Hong said.

Thursday's quake was followed by more than a dozen aftershocks, the largest reaching 4.8. The initial 6.4 quake rumbled to the surface from 14 miles deep.

The Taiwan Ministry of Interior and the National Fire Agency said electricity was cut off in parts of Kaohsiung county, Jia Yi city and Jia Yi county. Taiwan's official news agency reported that a fire broke out in Jia Yi city.

Of the minor injuries reported, the interior ministry said that nine were in Kaohsiung county and two were in Jia Yi county.

Two small hotels near the epicenter that were contacted by CNN reported no damage, though the buildings shook for a few seconds during the quake.

Albert Yu, communications manager of the humanitarian organization World Vision, told CNN he was about halfway through a 90-minute trip via high-speed train from Taipei to Tainan when the quake struck. Passengers did not feel the quake, he said, but operators stopped the train and announced what had happened. More than an hour later, the train had not resumed service.

"The operator is examining the train and the tracks," he said, adding that there was concern about the stability of the area, particularly after the typhoon. "Inside the train, people are calm and are waiting it out -- opening laptops, starting to work and chatting with people around them."