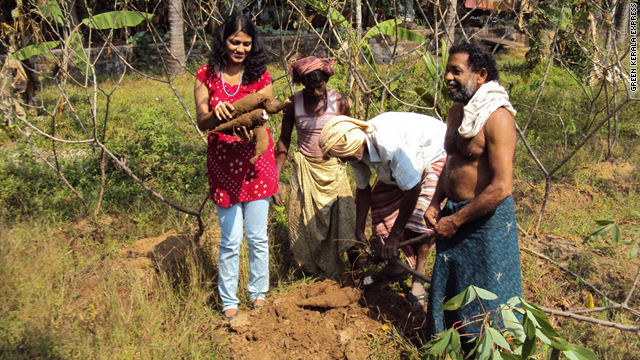 New Delhi, India (CNN) -- A new game show in India will award prizes to villages that are going green.

India's state-owned Doordarshan television network will air the new version of "Who Wants to be a Millionaire?" -- which will be called "Green Kerala Express," after the coastal state of Kerala in which it will be filmed.

The show has received about 250 entries ahead of its March 1 broadcast, Kerala Doordarshan assistant director Sajan Gopalan told CNN.

Among the contestants is a village that has rejected use of fertilizers and pesticides and adopted organic farming, he explained. Another competitor is a group of households converting degradable waste into biofuel, he added.

An initiative to replace incandescent bulbs with modern, energy-saving fluorescent lights in a whole neighborhood is another entry, Gopalan said.

The program's anchors will travel to selected villages in Kerala on bicycles for the shooting of the 105-episode program -- which will only be broadcast in that coastal state.

"The basic format will be that of a travelogue and thus it differs from conventional reality shows," Gopalan explained.

A technical jury will select village councils and other institutions on the basis of filmed documentation of their projects, according to the show organizers.

In studios, selected participants will then face questions from judges and the audience as videos of the projects are played for viewers, who can then rate their performance through mobile text messages to add to the score.

The winning project will receive a cash prize worth about $213,000, which Gopalan said would be funded by the state government.

"Green Kerala Express" is being launched a year after the smash hit "Slumdog Millionaire" swept the Oscar awards. The film, directed by Danny Boyle, told the tale of an improbable game show contestant, Jamal Malik, who wins the jackpot in "Kaun Banega Crorepati," India's earlier Hindi adaptation of "Who Wants to be a Millionaire?"

"But 'Green Kerala Express' is unique. It focuses on the collective efforts of the peoples to improve lives and work for sustainable development at the grassroots level," Gopalan said.

According to India's 2001 census, Kerala leads the country of a billion-plus residents in literacy. About 91 percent of Kerala citizens are literate -- compared to the national figure of 64.8 percent, data shows.

At the rural level, the state has about 1,000 village councils, according to official figures.

"The show gives opportunity to all of them to map their resources, visualize their success stories for others to emulate," Gopalan remarked.

India has vowed to reduce its carbon emissions by up to 25 percent between 2005 and 2020 voluntarily but refuses to accept legally-binding cuts that it fears may hamper its growth as a rising economy.

He described the Copenhagen accord as a catalogue of voluntary commitments.

"Presumably the countries that have made the commitments willingly have assured themselves that they can be and will be fulfilled. A modest accord that is fully implemented may be better than an ambitious one that falls seriously short of its targets," the prime minister said.