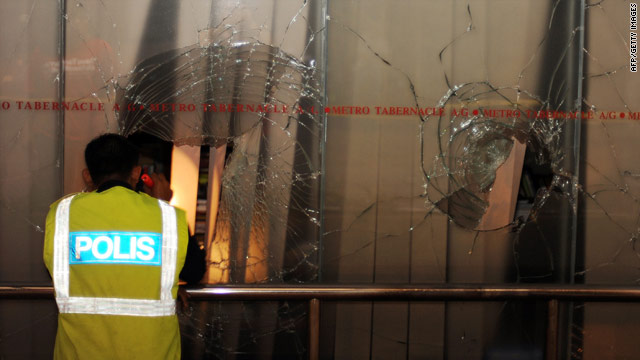 (CNN) -- Two more churches in Malaysia were firebombed Sunday, bringing the total to six since a court ruled that non-Muslims can use the word "Allah" as a term for God.

No one has been hurt in the attacks, which began Friday. They follow a high court's ruling that Christians can use the word "Allah" in literature printed in the country's official language, Malay.

In Malay, the word for God is "Allah," as it is in Arabic.

But many in the predominantly Muslim country, including the government, believe the word should be exclusive to Islam.

The government has banned the use of the word in Christian literature, saying it is likely to confuse Muslims and draw them to Christianity.

It has also appealed the high court's ruling.

The bombings may be an attempt to intimidate judges to overturn the decision, said the Rev. Hermen Shastri, general secretary of the Council of Churches in Malaysia.

Political leaders from a range of parties deplored the attacks on the churches.

Prime Minister Najib Razak visited one of the targeted churches on Saturday and called for calm.

Emphasizing his resolve to maintain ethnic and racial harmony in society, Najib also said the Muslim faith prohibits insulting other religions or destroying their sanctuaries.

In recent months, authorities in Malaysia have seized more than 20,000 Bibles because they refer to God as Allah.

The seizures have fed fears among minority groups, which see signs of encroaching Islamic fundamentalism in the predominantly Muslim but multiracial country.

A Roman Catholic weekly newspaper, The Herald, challenged the ban in court after the government threatened to revoke the newspaper's license for using the word in its Malay edition.

Hearings on the case went on for two years before the high court's ruling last week.

Malaysia has some of the tightest government restrictions on religion in the world, according to a study published last month by the Pew Forum on Religion & Public Life. The country was among the 10 most restrictive countries out of 175 in the survey.

But it had relatively low levels of social tension between religious groups, the report found. The Pew study covered events from mid-2006 to mid-2008.