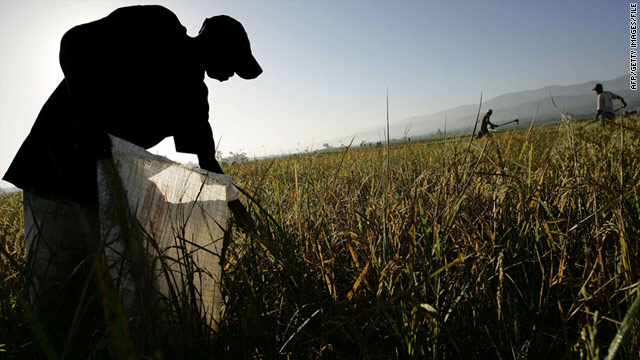 Farmers are reluctant to step into rice paddies, which are fed by water that could be tainted with bacteria that cause cholera.
STORY HIGHLIGHTS

(CNN) -- Cholera has already killed almost 3,000 Haitians. Now it is threatening to cause misery in another vital way.

A chunk of Haiti's rice harvest will probably be lost because of farmers' fears of cholera contamination, the United Nations said Wednesday. On top of that, consumers are afraid to buy rice grown in areas affected by the cholera outbreak.

The U.N. Food and Agriculture Organization and the Haitian Ministries of Agriculture and Health are providing hygiene information to farmers who are reluctant to step into rice paddies, fed by rivers and canals, to harvest the crops.

The effects of the cholera outbreak were magnified by floods in November caused by Hurricane Tomas.

"Without a timely response to the damage caused by floods and cholera to Haitian agriculture, food security could plunge, worsening the effects of last January's earthquake on the poor rural population," the FAO said in a statement.

Cholera has sickened more than 130,000 people in Haiti and 2,761 have died. But those numbers from the Haitian health ministry are from December 18.

Medicins Sans Frontieres (MSF or Doctors Without Borders), which has been operating cholera treatment centers throughout Haiti, warned that the disease is still spreading.

Symptoms of the acute, bacterial illness, which is caused by drinking tainted water, can be mild or even nonexistent. But sometimes they can be severe: leg cramps, profuse watery diarrhea and vomiting, which can cause rapid loss of body fluids and lead to dehydration, shock and death.

Some aid groups, including MSF, have criticized the cholera response in Haiti as woefully inadequate, given the fact that about 12,000 aid groups operate within the country.

"I recently went to Haiti's capital, Port-au-Prince, and found my Medicins Sans Frontieres colleagues overwhelmed, having already treated more than 75,000 cholera cases," MSF International President Unni Karunakara wrote in a commentary published this week in a British newspaper, the Guardian. "In the 11 months since the quake, little has been done to improve sanitation across the country, allowing cholera to spread at a dizzying pace."