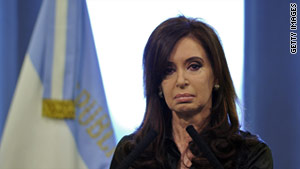 The analysts were curious about the "interpersonal dynamics" of the president and her husband Nestor Kirchner, who was also his wife's immediate predecessor as president.

The cable, which was sent from the secretary of state's office and signed by Hillary Clinton, said that the analysts had "a much more solid understanding of Nestor Kirchner's style and personality than we do of Cristina Fernandez de Kirchner," and wanted to develop "a more well-rounded view" of the then-president's personality.

Among the questions put to the U.S. Embassy in Buenos Aires was a series about President Fernandez de Kirchner's mental state and health: how she managed her nerves and anxiety, how stress affected her behavior toward advisers and decision-making, whether she was on medications, and how she calmed down when distressed.

The cable also asked about President Fernandez de Kirchner's approach to dealing with problems, and whether she shared her husband's "adversarial view of politics." It also asked about how the Argentine first couple divided up their day and on what issues each of them took the lead or deferred to the other.

The 2009 cable also asked about the health of former President Kirchner. He died of an apparent heart attack in October.

President Fernandez de Kirchner was elected to office in October of 2007, at the same time then-Sen. and former first lady Clinton was seeking the Democratic nomination for the 2008 presidential election in the United States.