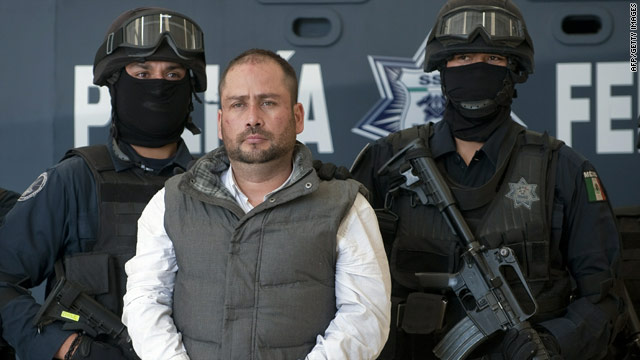 (CNN) -- An alleged gang member who police say was behind 80 percent of the killings in Ciudad Juarez, Mexico, over the past 16 months was arrested over the weekend, officials said.

Police believe that Arturo Gallegos Castrellon, known as "El Farmero," was the leader of the Aztecas gang, a group closely linked with the Juarez cartel and its enforcement arm, La Linea.

Gallegos confessed to authorities that he ordered the killings of three people linked to the U.S. consulate in Juarez in March, as well as the attack on a party of young people that killed 14, federal police said.

The 32-year-old was arrested Saturday.

Gallegos "is allegedly responsible for homicides, extortions and distribution of drugs in all the sectors of Ciudad Juarez," the federal police said in a statement.

He was captured as part of an operation to dismantle the Aztecas gang, police said.

Surveillance and tips from the public led authorities to a house occupied by armed men, where Gallegos was arrested.

According to authorities, the gang leader also admitted to the killings of five federal police officers.

Two others were captured along with Gallegos. Carlos Rodriguez Ramirez, 41, is accused of smuggling drugs between Juarez and El Paso, Texas. Gisela Ornelas Nunez, 32, was identified as being in charge of transporting drugs and weapons to Juarez, police said.

Police seized two assault rifles and two handguns, along with 228 cartridges for different weapons. They also found 90 grams of what police believe is marijuana. Two cars and two trucks, including one that was armored, were also taken.

In 1996, Gallegos was arrested in the United States for drug trafficking, Mexican authorities said.

There have been more than 2,500 drug-related killings in Juarez this year alone, signifying that if Gallegos' claim is accurate, he would be responsible for more than 2,000 murders. Those numbers would be comparable to those of some of the most ruthless war criminals.

But Tony Payan, a professor of political science at the University of Texas at El Paso, said that such staggering statistics must be examined with skepticism.

The number does not specify whether he was directly responsible for those deaths or marginally linked through his role in the gang.

Still, "no doubt this is a big bust," Payan said, describing Gallegos as one of the heads of the Azteca gang.

The Azteca gang is dedicated to doing the bidding of the Juarez cartel and is in a battle with a rival gang, the Artistas Asesinos, who work for the Sinaloa cartel.

As a whole, the Azteca gang is certainly responsible for thousands of deaths over the past four years, Payan said.

Gallegos was key because he worked closely with the Juarez cartel leadership and directed side enterprises, such as robbery, extortion and kidnappings.

"He's probably the brains behind the strategy of a self-financing gang," Payan said.

The arrest is a victory for President Felipe Calderon's offensive against the drug cartels, and taken together with other recent killings or arrests of high-level leaders, shows the police strategy, Payan said: to go after the big fish in the drug trafficking organizations.

"To cut the legs off at the street level, we have to cut the head," he said of the plan.

Among the killings Gallegos admitted to are the high-profile shooting deaths of three people linked to the U.S. consulate in the city. The shootings occurred March 13 when consulate employee Lesley Enriquez and her husband, Arthur Redelfs, were gunned down as they left a birthday party in their SUV.

Jorge Alberto Salcido Ceniceros, the husband of another consulate employee, was killed in a separate vehicle.

Because Gallegos' arrest might be linked to the ongoing investigation into the killings of the Americans, an FBI spokesman declined to comment on the development.