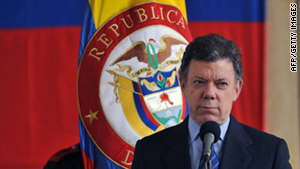 (CNN) -- The presidents of Colombia and Ecuador announced Friday they will resume full diplomatic relations after more than two years of estrangement.

Colombian President Juan Manuel Santos and Ecuadorian President Rafael Correa made the announcement at a summit in Georgetown, Guyana, of the Union of South American Nations, known by the Spanish acronym UNASUR.

"The openness and transparency of Santos is worth pointing out," said Correa in a statement posted on his government's website about the agreement. "It is the best present that we can give our people," he said.

The attack killed 25 people, including Raul Reyes, a leader of the rebel group. At the time, Santos was Colombia's defense minister.

On November 18, 2010, in a meeting in Quito, Ecuadorian officials laid out their requirements for the rapprochement, according to Correa's website. Among them was the agreement by Colombia to hand over information -- including computer discs -- recovered in the raid.

According to Santos' website, Correa said that Colombian officials had given to Ecuador the discs "from the computers that supposedly belonged to Mr. Reyes." He added, "They have given something very important, information about how the operation in Angostura was executed."

Santos said the reestablishment of relations "is going to permit us to be much more efficient in everything that we want, which is the well-being of our peoples."