Accused Mexican drug kingpin to be extradited to U.S. 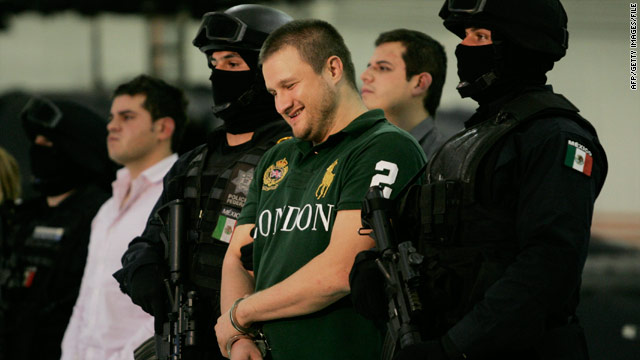 "The process of extradition has begun" against Edgar Valdez Villarreal (shown after his arrest in August), a spokesman said.
STORY HIGHLIGHTS
RELATED TOPICS

Valdez was arrested in August and is thought to be one of Mexico's most ruthless drug traffickers. It was not immediately clear when he will be sent to the United States.

"La Barbie is in the federal prison in Mexico City, but, yes, the process of extradition has begun," said spokesman Isaac Fragoso. "Initially, it's the order of detention and apprehension. Ultimately, it's a judicial decision to see when he will be extradited."

Valdez, known as "La Barbie" because of his blue eyes and fair complexion, was a one-time top lieutenant of Mexico's most wanted man, Joaquin "El Chapo" Guzman, authorities say.

He is accused in the United States of attempting to launder money and conspiring to import and distribute cocaine. Valdez is believed to have played a key role in shipping roughly 100 kilograms (220 pounds) of cocaine across the border at Laredo, Texas, every week for much of 2005, U.S. authorities have said.

In Mexico, Valdez faces charges that include drug trafficking, kidnapping and arms possession, according to a statement from the Attorney General's Office.

More than 28,000 people have died in drug-related violence since Mexican President Felipe Calderon intensified the government's fight against drug cartels and organized crime after taking office in December 2006, according to government figures.